The historic Michelson Cinema Research Library, the legendary repository of all things Hollywood, was donated to the Internet Archive was today by the Library’s founder, Lillian Michelson. She and the Internet Archive’s founder and digital librarian, Brewster Kahle made the announcement jointly.  A virtual ribbon cutting, panel discussion and a screening of the documentary Harold and Lillian: A Hollywood Love Story, will be held on Wednesday, January 27 from 4-6:30 PM PST. At that time Michelson, 92, will unveil the first phase of her new digital collection. 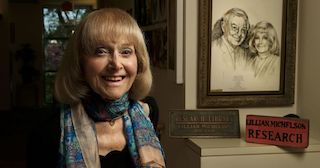 Michelson said she made the donation so that this irreplaceable physical collection will be preserved intact and digitized as much as possible, providing free public access to these research materials via the Internet Archive’s popular site, archive.org. When packed, Michelson’s rich collection of 5,000 books, 30,000 photographs, and more than 1,000,000 clippings, scrapbooks and ephemera fill more than two 18-wheel tractor trailers.

Kahle said, “A library is more than a collection of books. It is the center of a community. For decades, the Michelson Cinema Research Library informed Hollywood— and we want to see that continue. Lillian spent her life supporting top Hollywood directors and designers. Many organizations wanted pieces of the collection, but I think the importance of keeping it together is so it can continue to help inspire global filmmakers to make accurate and compelling movies.”

“I feel as if a fantasy I never, never entertained has been handed to me by the universe, by fate,” said Michelson. “The Internet Archive saved my library in the best way possible. I hope millions of people will use it [to research] space, architecture, costumes, towns, cities, administration, foreign countries… the crime business! Westerns! That’s what is amazing to me, that it will be open to everybody.”

Lillian and Harold Michelson established the library in 1969 while Lillian was working as a volunteer at the Samuel Goldwyn Studios. In its more than 50-year history, the Michelson Cinema Research Library has had many homes. The library consists of research materials from Goldwyn, United Artists, and many past donations from leading art directors. Its contents will now be moved for long-term preservation to the Internet Archive’s physical archive in the San Francisco Bay Area. 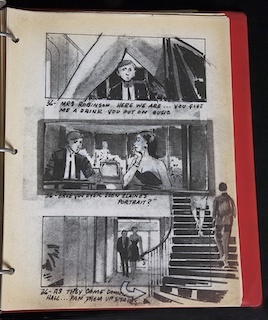 “The Michelson Cinema Research Library has been looking for a digital home for a long time and this means that its important materials will be available forever with 24/7 access throughout the world,” said Thomas Walsh, former president of the Art Directors Guild.

Bringing this historic Hollywood design resource back to life—a largely digital life—can make it a global design resource for designers, filmmakers and researchers in search of information and visual inspiration. For 50 years, Michelson’s research informed scores of Hollywood films, including The Right Stuff, Rosemary’s Baby, Scarface, Fiddler on the Roof, Full Metal Jacket, The Graduate and The Birds.

“Lillian Michelson opened my eyes to the importance of a research library to all aspects of motion picture production,” said Academy Award-winning director, Francis Ford Coppola, who invited Michelson to move her library to the grounds of his Zoetrope Studios. “At a time when the rich and deep research libraries created and maintained by the motion picture studios were being ‘given away’ or otherwise destroyed, Lillian was a beacon of light guiding us to consider them as treasure.”

Her story was told in Harold and Lillian: A Hollywood Love Story, a 2015 documentary produced and directed by Daniel Raim and currently streaming on Kanopy, Amazon Prime and Apple TV. The Save Lillian's Library Fund will now focus on building a new website with navigational tools that are simple, intuitive and non-language dependent to help people utilize these digital materials. Meanwhile, the Internet Archive is looking for supporters to help with the costs of digitizing a collection of the complexity and magnitude of the Michelson Cinema Research Library.