Men in Black Returning to the Big Screen

In celebration of its 25th anniversary this summer, Fathom Events is bringing the science fiction comedy hit Men in Black back to the big screen across cinemas nationwide. 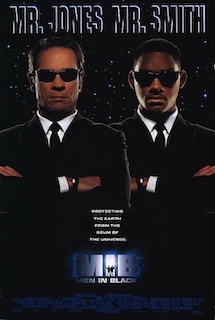 The special two-day only presentation of the new 4K version will be in theatres on Sunday, July 3 and Monday, July 4 and will feature an interview with director Barry Sonnenfeld.

Men in Black follows the exploits of agents Kay (Tommy Lee Jones) and Jay (Will Smith), members of a top-secret organization established to monitor alien activity on Earth.

The two MiB find themselves in the middle of the deadly plot by an intergalactic terrorist (Vincent D'Onofrio) who has arrived on Earth to assassinate two ambassadors from opposing galaxies.