Barco is installing two flagship laser projectors at Lotte World Tower in Seoul, South Korea. Barco’s DP4K-60L projectors will illuminate the 34-meter wide screen in Lotte Cinema’s Super Plex G theatre, which is the largest screen on the planet. The story of Lotte Cinema is filled with superlatives. 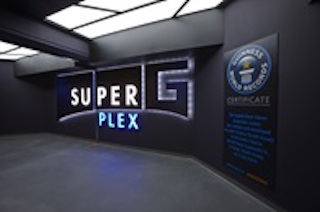 With over 900 screens in three countries, Lotte Cinema is one of the fastest-growing cinema exhibitors in the Asia Pacific region. In Korea, the company – a subsidiary of premium department store Lotte Shopping – operates 105 sites. Its most prominent multiplex — the largest in Asia, in fact — features a total of 21 screens and seats 4,615 people. It is located in Lotte World Tower, the tallest building in South Korea, and will open at the beginning of April.

One of the main attractions in Lotte World Tower will undoubtedly be the Super Plex G theatre, which seats 622 spectators and features the world’s biggest cinema screen. It is part of Lotte’s Super Plex brand of premium auditoriums, which includes an ultra-wide screen, immersive 3D audio and extra-bright 3D imaging with a 2.4-gain screen.

Lotte Cinema had already installed four xenon projectors at its Super Plex G theatre. Convinced about the benefits of flagship laser, they decided to replace those units with two Barco DP4K-60L projectors before the grand re-opening.

Stijn Henderickx, vice president of cinema at Barco said, “In 2015, Lotte Cinema made the switch to flagship laser after extensive testing – a strategic technology choice that perfectly complemented Lotte’s upscale cinema concept. Today, we are honored to see their commitment to premium cinema experiences and flagship laser projection extend itself to their most ambitious auditorium, the Super Plex G. We truly believe that there could be no better match for two companies as passionate about cinema as Lotte Cinema and Barco.”