Walt Disney's The Lion King leads Fandango’s weekend ticket sales with a chart-topping 99 out of 100 on the Fanticipation movie buzz index score. The Lion King adaptation now ranks as Fandango’s second best pre-seller of the year to date, surpassing Captain Marvel and following Avengers: Endgame in 2019’s advance tickets at the same point in the sales cycle, according to Fandango. 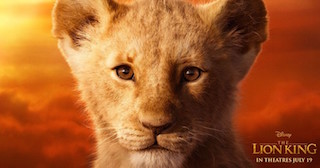 In second place for this weekend is Marvel Studios’ Spider-Man: Far From Home with 79 points, followed by Disney Pixar’s Toy Story 4 with 68 points.

“The Lion King is a game-changer for visual effects,” said Fandango managing editor Erik Davis. “Donald Glover & Beyoncé take the music to another level, and Seth Rogen and Billy Eichner steal many of the scenes. It’s absolutely stunning in every way.”

According to a survey of moviegoers planning to see The Lion King:

97 percent are fans of the original The Lion King.

95 percent are excited to see how The Lion King adaptation incorporates the film’s iconic soundtrack.

77 percent are fans of movie musicals this summer.