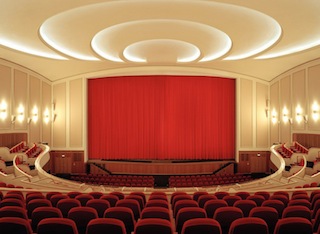 Kinoton installed a DCP 30 LX II 4K projector, supporting higher frame rates projection. Kinoton also replaced the 19.5-meter-wide roll-up screen. Behind it is a stage that makes it possible to use the enormous auditorium for other purposes as well, such as theatrical and cabaret performances, readings, and concerts.

Kinoton has also outfitted the Lichtburg’s small auditorium, which is named after Indian film actor Sabu and accommodates 150 viewers, with a DCP 30 SX II 2K projector. The projectors of the DCP SX II series are specially designed to meet the characteristic requirements of smaller screens, program cinemas, and art house cinemas. All of them are based on projection technology supplied by Barco.

Both of the projection systems now installed in the Lichtburg can be remotely maintained via Kinoton Remote Service. Via an access channel with multiple anti-hacking shields, Kinoton’s technicians can provide support if something malfunctions and install software upgrades on the system.

The Lichtburg also decided to go for Kinoton DCA Digital Cinema Automation. This system makes it possible to link together the digital cinema equipment and all auditorium functions, including still-present conventional ones, via the Kinoton CAN bus. The Kinoton DCA delivers maximum flexibility for adding or changing DCA modules when and as needed.

The Lichtburg boasts a long, turbulent history. When it first opened in 1928 it had around 2000 upholstered fold-up seats and an electric seat indicator panel. After being forced to close during Second World War, it reopened in 1950. A difficult period began in the mid-1990s, with the Lichtburg nearly going out of business several times. The building complex it occupied was also in need of renovation. In 1998 the Lichtburg was acquired by Essener Filmkunsttheater GmbH, and the company’s managing director, Marianne Menze, has been successfully running the Lichtburg ever since. The cinema temporarily closed for restoration work for a year starting in March 2002.