Gower Street Analytics and Comscore Movies today announced the launch of the new, global version of Gower Street’s Forecast service. Global Forecast, developed by Gower Street Analytics in partnership with Comscore Movies, aids the global distribution strategy of studios and is powered by a proprietary theatrical simulation model that generates a realistic forward market view, with film estimates by country, title and day. 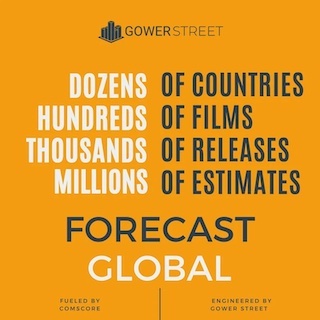 Forecast Global now covers more than 40 countries in detail, an expansion from six major markets previously, simulating 95 percent of the global box office up to 18 months in advance. The service is already in use in individual or multiple territories by three major studios and many independent distributors and exhibitors around the world.

While the global offering was in its test phase in October 2021, Gower Street estimated total global box office in 2021 would reach $21.6 billion. On January 6, Gower Street was one of the first film analytics companies to estimate the year-end result, at $21.4 billion. Last month official final figures published by the MPA in its annual Theme Report stated the figure to be $21.3 billion. This showed that Gower Street’s global estimate was less than 0.5 percent off the final result in its early January announcement and showed only a 1.4 percent differential in its October forecast.

“After seeing phenomenal recovery in 2021, we predict that box office revenue growth will continue to soar in 2022, reaching more than $30 billion globally,” said Dimitrios Mitsinikos, CEO of Gower Street Analytics. “This expansion of our Forecast service will help the studios maximize the potential of their diverse slates of upcoming content in a dramatically evolving landscape.”