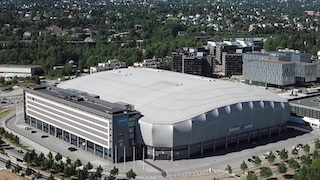 Among the films to be shown are the Easter comedy Fjols til Fjells, Pixar's latest film Forward, the film about Elleville Elfrid, the Oscar-winner Parasite, Vin Diesel's superhero movie Bloodshot and several other films for children, young people and adults.

The films will be shown on a large cinema dish. Twenty-four bass speakers are being installed in the arena, in addition to the sound being sent to the radios in the cars.

Organizers recommend bringing a portable FM radio that runs on battery. A car radio with FM will work but there is the risk of running down the car battery if the engine isn’t running.

The cars will be placed at two meters intervals; all windows must be closed. Patrons are not allowed to leave the car during the event.