Dolby Laboratories’ Ioan Allen has been presented with the International Cinema Technology Association presented with its Icon Award. Allen becomes the second honoree to receive the award, which was first bestowed upon the Will Rogers Motion Picture Pioneers Foundation for its efforts to aid members of the cinema industry when COVID-19 closed theatres. 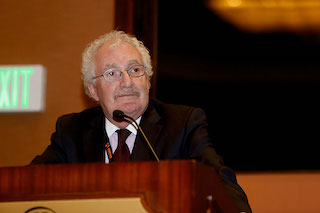 The Film Expo Group’s Robert Sunshine, the executive director of ICTA, introduced Allen during the ceremony by pointing out that, though few others have had such distinguished careers, he has a lot in common with the Dolby veteran. “Ioan has won 100 awards, including five Academy Awards,” said Sunshine. “I am the recipient of five merit badges from the Cub Scouts. Ioan has one of the best technical minds in the motion picture industry, yet I still I don’t know what the hell a B-chain is.”

Allen is a senior vice president at Dolby who has been with the company since 1969. During his lengthy and ongoing career, he was responsible for the creation and development of Dolby Stereo film technology. Allen’s contributions to motion picture technology are legendary, either directly or through heading up more professional technical organizations than one could possibly name. He’s a Fellow of both the Society of Motion Picture and Television Engineers and the Audio Engineering Society.

Allen has been the backbone of the ICTA for more than 40 years and led the creation of the annual Seminar Series. That series attracts more than 225 people from all walks of the industry and is one of the most important networking events in the technical arena.