TheaterEars and the Walt Disney Studios have announced that Disney and Pixar’s Onward is the first movie ever to have Audio Description available on the TheaterEars app, enabling moviegoers with visual impairments the ability to enjoy the film. “We are proud to work with Disney to break new ground with this [new] offering in our app,” said TheaterEars CEO Dam Mangru. “Onward is a fantastic film for moviegoers of all ages, and everyone should have the opportunity to enjoy it.” 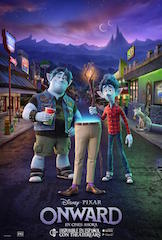 Disney and TheaterEars have previously worked together on Disney-Pixar’s Coco, which was the first nationwide movie released in Spanish using the app’s Alternate Language Track, as well as other major titles in Spanish including Avengers: Endgame, Incredibles 2, Aladdin, and Captain Marvel.

Mangru says the TheaterEars Audio Description Track is easy to use. Simply download the app and select your movie and showtime to get the audio description track on your phone. When in the theater, press the play button on the app and within seconds TheaterEars will sync automatically to the film and play the audio track.

To date, TheaterEars has reached more than half a million total users, has been one of the top 50 entertainment apps on the US App Store, has been granted five worldwide patents, and has named Lin-Manuel Miranda as the company’s global ambassador.

The TheaterEars app is available to moviegoers in the United States and Puerto Rico as a free download on the App Store and Google Play. Onward opened in movie theaters nationwide on March 6 and is also available in Spanish on the TheaterEars app.