CinemaNext has Recouped its Investment in the DFP

European exhibitor services specialist CinemaNext has announced that the UK Digital Funding Partnership, the ground-breaking project established by the UK Cinema Association and CinemaNext to allow more than 100 small and medium-sized cinema operators to digitize their sites across the United Kingdom, has reached recoupment. 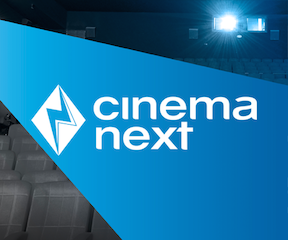 The DFP program was designed by Steve Perrin and Phil Clapp, working with what was then dcinex to assist 300 UK screens across 120 exhibitors to digitize their screens and ensure they could continue to show first run films to their audiences.

CinemaNext provided the funding for the DFP, recouping its investment primarily through virtual print fees paid by film distributors. Three spares depot were also established in the UK, together with a remote support facility at its headquarters in Belgium to ensure a fast response time to any technical issues.

On reaching the full recoupment point, all DFP members have taken full ownership of the digital projection equipment funded through the scheme and have seen the removal of restrictions on content per the VPF program.

“By any measure, the DFP has proven to be successful, enabling a significant number of smaller cinema operators to make the transition from 35mm to the new digital projector technology, and helping to ensure that no sites were ‘lost’ during the process,” said Jerry Murdoch, country manager for CinemaNext UK & Ireland. “All equipment supplied by dcinex under the DFP carries a 10-year parts manufacturer’s warranty, with the exception of any equipment previously owned by the cinema and which was purchased by dcinex from the exhibitor and rolled into the DFP. Even though the contract has now ended, the warranty conditions remain, and DFP members continue to have the comfort of knowing that spare parts will be supplied free of charge. They will, however, need to have a manufacturer agreed support contract in place to ensure that spare parts are provided under their warranty.”

UK Cinema Association chief executive Phil Clapp added, “The UK cinema industry as a whole should be hugely proud of the success of the UK Digital Funding Partnership. We would not have reached this point without support from a wide range of partners. That includes the major cinema circuits, [that] helped fund the Partnership’s establishment, those smaller operators who put their faith in the model and colleagues in film distribution whose financial contributions made this all achievable. And in CinemaNext of course we could not have picked a more supportive partner.”