The Chosen Season 3, presented by Fathom Events, opened in theatres across the United States November 18 and, its producers say, was expected to do very well at the box office. 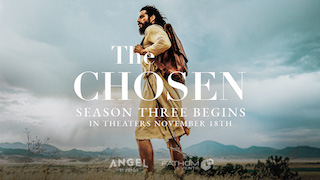 Angel Studios, which enables filmmakers to crowdfund, create, and then distribute films and TV series globally with full creative control and backed by thousands of Angel investors, has announced that’s it’s signature series, The Chosen: Season 3 had a $3.7 million gross on opening day and was on pace to have an historic weekend at the box office.

“For the second year in a row, The Chosen is capturing the imagination of moviegoers around the country,” said Angel Studios CEO Neal Harmon. “After the overwhelming response of Chosen fans, and now Wingfeather Saga fans at a packed theatrical event in Nashville last week, we’re seeing that the same audiences who have helped us break streaming records can have similar impact at the box office. And, in addition to the estimated $3.7 million Friday, based on last year’s Chosen special, we expect The Chosen Season 3 Sunday sales to exceed Saturday’s, partially driven by a strong showing anticipated on Sunday night.”

Last Year’s Christmas with The Chosen: The Messengers Finished fourth in its opening weekend box office. Last year’s Chosen was the most successful Fathom Event in history, Harmon said.