Sue Pelino of Broadway Video was nominated for a Primetime Emmy Awards as part of the sound mixing team for outstanding sound mixing for a variety series or special. The nomination was awarded to the audio production team on the 2017 Rock And Roll Hall Of Fame Induction Ceremony that aired on HBO. Pelino served as re-recording mixer on the project. 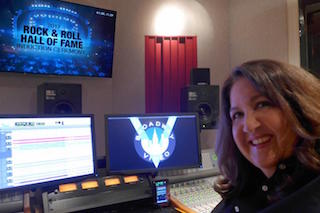 "Capturing the spirit of the irreplaceable events of the Rock and Roll Hall of Fame induction ceremony is just short of a small wonder, but it's a feat that Sue Pelino has been mastering for years," said Stephanie Rutkowski, vice president, Broadway Video Post Production. "Following the six-hours of live performances of music legends at the 32nd annual ceremony, Pelino and team had less than two weeks to do their magic to mix a three-hour broadcast."

Sue Pelino, vice president of audio post-production, Broadway Video, has received two Emmy awards and nine prior nominations. Her career as an audio post-production engineer rests on her early years playing guitar in rock bands and recording original songs in her home studio.