Arri received an engineering Emmy this week for the Alexa digital motion picture camera system. On October 25, 2017, at the Loews Hollywood Hotel, 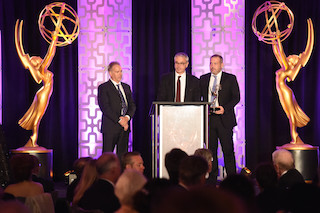 Actress Kirsten Vangsness, who presented the award said, “The Alexa camera system represents a transformative technology in television due to its excellent digital imaging capabilities coupled with a completely integrated postproduction workflow. In addition, a cohesive pipeline, the onboard recording of both raw and a compressed video image, and an easy-to-use interface contributed to the television industry’s widespread adoption of the Arri Alexa.”

Arri executive board membe Franz Kraus said, “This prestigious award especially recognizes the hard work of the Alexa core team of engineers, who started almost two decades ago in the digital intermediate days. They brought all of their accumulated knowledge and experience to the Alexa camera project, thus implementing the much-appreciated cinematic look of the Alexa. We are very grateful for this very special acknowledgement of the Television Academy.”