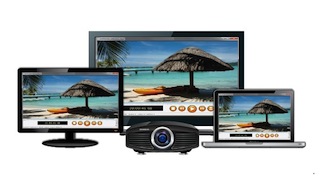 Archimedia Technology, a new company whose technology and applications bridge the gap between content producers and their archives without loss of quality, today announced the Archimedia Master Player v1.7. The new version features the ability to handle compressed audio, and added support for even more formats.

The Archimedia Master Player is in use around the world by customers from all aspects of media and entertainment. Three major studios use the player in 2K and 4K cinema production. Two major TV and cable networks and a major online VOD provider use it in quality control for distribution and 4K testing. In addition, three major post-production providers, including Crawford Media Services and DAMsmart, and five major institutional archives, have made the player a critical part of their workflows, as has MyEye Media, a leading quality control service provider to the movie studios. Recently, award-winning independent filmmaker Robert Berger relied on the Archimedia Master Player to free him from finding DCP screening rooms as he travels to promote his award-winning film, Charlie Victor Romeo.

"We've made it our mission to ensure that the Archimedia Master Player supports not only the largest, most demanding master media in the world today, but also the smallest, most common formats used by the world's major distributors. No other player supports such a wide range of formats and still gives media professionals the tools they need to view and play out to any screen," said Josef Marc, Archimedia chief marketing officer. "Cracking the compressed-audio problem opened up support for the last remaining group of unsupported formats and allows users to hear their audio with their video without having to change players. The wider range of SD-to-4K formats will allow people to be more creative in where and how they use the player, such as bringing master formats like DCP, DPX, and uncompressed video to screening rooms and conference situations."

As part of its commitment to support any format, Archimedia has added support for more formats to version 1.7 based on both customer requests and standardization efforts such as IMF. Archimedia has extended support for the DPX format to the largest RGB, 16 bit, and 4K sizes and added support of Grass Valley's GXF wrapper. Avid's DNxHD format was already supported when wrapped in MXF, but now it is also supported when wrapped in Apple's MOV, enabling customers to mix operating systems in a single workflow (such as Avid in Windows with Final Cut in Mac OS).

In version 1.7, Archimedia introduces performance enhancements to address UHD and 4K Cinema in DPX, TIFF and JPEG2000. Due to the extremely large size of the files, it has been a challenge to play these materials smoothly in real time without any impact on quality. An industry-first automatic quality-adjustment coaxes the best performance from the hardware, enabling the Player to play JPEG2000 Level 7 lossless 4K video at normal speed. A new pre-caching feature makes it possible for the Player to open and read very large DPX and TIFF file sequences fast enough to present a smooth viewing experience, eliminating the need to render/transcode into a viewable format and tie up a more costly and billable room.

Whereas previous versions played only uncompressed master audio, Archimedia Master Player v1.7 plays formats with compressed audio — such as AAC, AC3, MP2, and MP3 — common among distribution formats. This capability allows customers to use the Archimedia Master Player to view both the distribution copies and their higher-resolution source masters in the same workflow.

The new version is available now from Archimedia at www.archimediatech.com and is shipping with all Archimedia Workstations. The upgrade is free for existing customers in their Archimedia Master Player when connected to the Internet and by download from the Archimedia website.