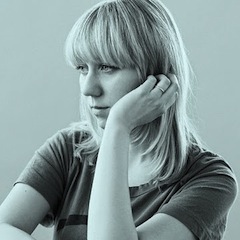 Accomplice Media has signed filmmaker Eva Michon for exclusive representation in commercials.  A skillful visual storyteller with a whimsical sense of humor, Michon has earned considerable praise for her work in music videos and fashion films, the latter including work for such designers as Calla, Pink Tartan, Ten Over Six and Rita Liefhebber. Her first feature-length film, Death From Above 1979: A Fly in Amber about the Canadian dance-punk duo, is currently in post-production.

“I was drawn to Eva’s deft touch with storytelling which ranges from whimsical in her fashion films to poignant in The Riverbed,” says Accomplice Media executive producer Mel Gragido.  “She also has a good feel for contemporary city life, a feel that should be intriguing for advertisers.”

Michon studied filmmaking at Ryerson University in Toronto and began her career in Canada before relocating to Los Angeles two years ago. Recent projects include The Streets Are Still a Mess for Sebastien Grainger, and The Riverbed for singer, composer and multi-instrumentalist Owen Pallett (Arcade Fire). It centers on a middle aged man and his tense encounter with a group of street punks.

Michon plans to pursue advertising projects with similarly engaging narratives. “When I’m working with a designer, I want to know where they got the inspiration for the collection,” she insists. “If it’s a music video, I listen to the song and talk to the artist. I try to develop something that is visually interesting and has a concept or a story that will keep people watching.”