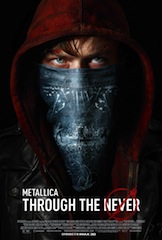 Venture 3D used Signiant’s Media Shuttle as its primary file transfer solution during production of Metallica’s latest cinematic venture, Metallica: Through the Never, which premiered in Imax 3D on September 27 and will premier in theaters everywhere on October 4. Under tight deadlines to deliver large files – 20 GBs numerous times a day – Venture3D relied on Media Shuttle to provide this high profile client with reliable and efficient service.

Venture 3D, known for its production work on Titanic 3D, The Green Hornet and Red Bull Media’s The Art of Flight, used Media Shuttle as its primary means of transferring Metallica’s iconic image files – footage displayed on background screens during the band’s live performances – to production partners. The music-driven, 3D film – written and directed by award-winning filmmaker Nimród Antal – couples live performance footage with a fictional storyline. To get the job done, Venture 3D needed an easy-to-use solution that provides the ability to transfer large files quickly and access them anywhere.

“With other solutions we face limitations on the size of the files we can transfer and the number of users that can collaborate on a project,” said Todd Cogan, senior vice president of operations, Venture 3D. “Media Shuttle is our ‘go to’ file transfer solution and we regularly use it for our most time sensitive and top priority projects, like the Metallica movie. It is flexible, extremely intuitive, lets us easily manage users, and work from multiple locations; and it does not inhibit our workflow in any way.”

A Media Shuttle user since October 2012, Venture 3D also appreciates that with Media Shuttle they can move large digital assets for a complex feature film project without purchasing additional connectivity bandwidth. “Working in 3D, we need to be able to move massive files – at times upwards to 200-300 GB in a single transfer – and do so quickly,” Cogan added. “With Media Shuttle, we see no limitations to the speed of our transfers. Being able to put resources towards technology advancements and the creative process rather than network capacity is beneficial to both our company and our partners.”

Media Shuttle offers the flexibility of customizable portals that can be branded and quickly configured in one of three modes – Send, Share or Submit – to support the needs of any project, team or media enterprise. With subscription-based pricing and functionality optimized for media professionals, Media Shuttle is in a class of its own for the movement of large, high-value digital assets.

“We’re honored to have Venture 3D’s high-profile work as yet another example of the momentum behind Media Shuttle and the advantages it brings to the entire media supply chain,” said Rick Clarkson, vice president of product management at Signiant. “3D films files are among the most massive assets in the industry, and so we’re particularly delighted that Media Shuttle is rapidly becoming the preferred choice for moving files quickly and easily.”