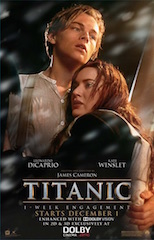 In celebration of the film’s 20-year anniversary, audiences across the U.S. can experience Paramount Pictures and Twentieth Century Fox’s Titanic in all Dolby Cinema at AMC locations, including 20 locations supporting 3D.

This marks the first-ever release of Titanic in Dolby Vision in 2D and 3D, a direct result of ongoing partnerships with both James Cameron and Paramount Pictures.

“We mastered a few minutes of Titanic in Dolby Vision and I was stunned. It was like seeing it for the first time. Now that the entire film has been mastered, I’m excited to share it with audiences across the U.S.,” said filmmaker and director James Cameron. “This is beyond 3D, beyond 70mm, it’s beyond anything you’ve seen before. The image leaps off the screen as bright and vibrant as life itself. This is the way all movies should be seen and without a doubt, Titanic has never looked better.”

“James Cameron shares our vision for creating the world’s best cinematic experiences,” said Doug Darrow, senior vice president, cinema business group, Dolby Laboratories. “Our partnership with James and Paramount Pictures has enabled us to showcase a masterpiece of theater in the most incredible way, leveraging Dolby Vision to breathe new life into one of the most awarded films in the history of cinema. Titanic at Dolby Cinema is truly a can’t-miss experience.”