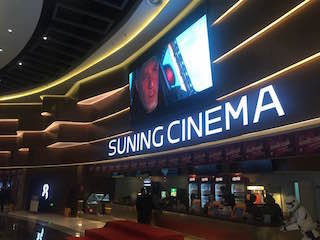 The luxurious 13-screen Nanjing Suning Cinema has been equipped with Christie CP2208 3DLP digital cinema projectors capable of displaying all formats including alternative and local content. It is the cinema chain’s first multiplex in the city to feature VIP screening rooms, concierge services, and customized events for discerning patrons seeking a new movie-going experience.

Xuzhou Suning Cinema is a meticulously designed multiplex made up of eight screens and 1,500 seats that caters to patrons of all ages. At the heart of this facility is the advanced Christie 6P laser projection system installed in its flagship auditorium boasting an 18-meter screen and 260 seats. 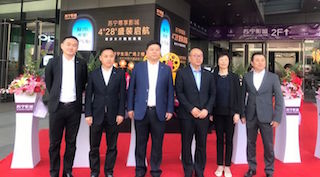 A Suning Cinema spokesperson said, “We are pleased to deploy a range of Christie cinema projection systems in our two newest multiplexes in Nanjing and Xuzhou, and this is a testimony of the strong relationship and trust that we have built with Christie. We’re committed to installing the latest, most innovative technologies and that is why we chose the Christie system, which represents the pinnacle of cinema projection, as it delivers the brightest images, the truest colors and the most superior 3D movie experience currently available.”

Jason Pei, deputy general manager, Christie China said, “We are delighted that Suning Cinema has continued to place its trust in our cutting-edge cinema projection systems. Our Christie Solaria Series digital cinema projectors are the perfect choice in meeting exhibitors’ demands for 2D and 3D presentations, delivering value with reliability and low total cost of ownership. On the other hand, our groundbreaking 6P laser projection system is designed to achieve exceptional brightness in 3D to provide audiences with a truly unforgettable cinema experience.”

Lin Yu, vice president, Christie Asia Pacific added, “I would like to congratulate Suning Cinema on the opening of its two latest multiplexes in Nanjing and Xuzhou, and for selecting our cinema projection systems to deliver an unparalleled viewing experience for movie-goers. We are confident that the Christie Solaria Series and 6P laser projection systems installed at both venues will redefine the cinematic experience by allowing audiences to enjoy brighter, clearer and more vibrant visuals like never before. We also look forward to a stronger strategic relationship with Suning Cinema in the near future.”