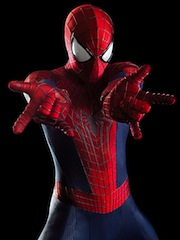 Spidey has decided to call a truce in the cinema sound format war. Sony Pictures Entertainment is teaming with Dolby and Barco to mix The Amazing Spider-Man 2 in both Auro 11.1 and Dolby Atmos cinema sound. The movie will be released in theaters internationally beginning April 16 and domestically on May 2. The move will no doubt increase the number of movie theatres available to show the movie.

The studio has also converted its landmark William Holden Theater to support both technologies for mixing.  The studio teamed with both Dolby and Barco to install a 56-speaker system and related equipment that is capable of mixing and playing both formats and has 4K digital projection and 3D capabilities.

Rory Bruer, president of Worldwide Distribution for Sony Pictures said, “We’re thrilled to be working with Barco and Dolby, both to convert the William Holden Theater and to incorporate these innovative technologies into The Amazing Spider-Man 2.  We are always looking for ways to offer greater definition and further enhance the moviegoing experience.  These technologies are one more way that we offer consumers a richer and unique theatrical experience.”

Paul Massey and David Giammarco will be creating both the Dolby Atmos and Auro 11.1 mixes.  Commenting on the announcement, they said: "We are thrilled to have these groundbreaking formats available for audiences viewing The Amazing Spider-Man 2. Both Atmos and Auro will allow us the creative freedom to fully immerse the audience with 3D sound as Marc Webb's vision of Spider-Man's world unfolds. Every member of the audience will experience what it's like to be Spider-Man swinging from building to building above a busy New York street!"

“Barco has channeled our industry-leading cinema technologies into an immersive audio solution that provides uniquely significant benefits to studios and exhibitors around the world,” comments Brian Claypool, senior director of strategic business development for Barco Entertainment. “We are deeply honored to have this opportunity to work with Sony Pictures and by empowering film makers with the perfect rendering environment that integrates seamlessly with their existing workflows, we can help them easily and cost-effectively deliver the most realistic, natural and comfortable immersive listening experience to bring their movies to life.”

“Dolby Atmos, the world’s first and only object-based cinema sound platform available today, marked a giant step forward in the evolution of movie storytelling. We are proud to have pioneered an approach to sound that delivers a sense of being in the moment alongside your favorite characters," said Doug Darrow, senior vice president, cinema, Dolby Laboratories. "We have successfully deployed Dolby Atmos in hundreds of cinemas around the globe, and dozens of the world's leading filmmakers embrace our new approach to sound.”