In Sound, Size Does Matter 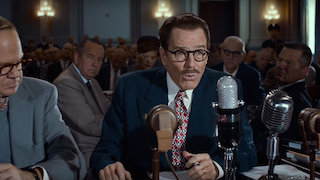 The obvious difference between sound for the big screen, the small screen, and now, the tiny screen, may not seem that different.  In many ways they are not.  As sound designers and editors, we want the viewer to experience every gunshot and explosion as well as every word, whether listening in a theater, at home on a TV, or earbuds on the subway. Sound for the big screen on a movie like Trumbo means you can use 5, 7 or in the case of Dolby Atmos, unlimited channels, for panning. We also have a large dynamic range because of the room size and speaker size.  This, in many ways, is the easiest for those of us creating the sound tracks.

Because of Dolby and THX, the rooms and speakers have become standardized, so that we have an idea of how the show is going to be heard in a theater.  As a sound designer/editor, we are able to use all the factors for creating the sound:  volume, frequency, panning, augmenting with subwoofers and unlimited tracks for combining as many individual sounds as needed.  We also have a lot more time to create the sounds to make sure the theatergoer hears and experiences every little detail that the director wants.

To get the detail directors and audiences expect now we use every tool available. Virtually all of us cut on Avid Pro Tools, software specifically designed for this task. We have a large library of sounds that have been recorded by different people in the industry for all kinds of shows. 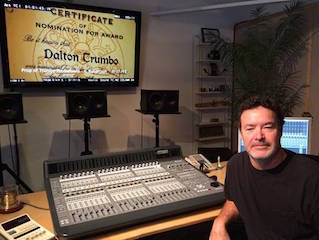 Singularly recorded sounds do not always convey the feelings we want.  For the prison in Trumbo, we used several techniques; combining backgrounds recorded in different jails and prisons, sprinkled in some specific sounds such as jail cells closing, added reverb for the largeness of the space, and topping it all off with loop group (a group of actors that is recorded, using just their voices to fill in spaces and convey a time and place in the film for prisoners, guards, and announcements).

In another instance, a single recorded gun probably will not have the impact we want, so, we will combine several gun sounds to make a single sound. On Rambo, the hero gun was 40-50 tracks wide. We wanted the detail of the gun. For that we used tracks for the trigger, hammer, shells ejecting, and of course the explosion of the gun.

We might use a single gun for the center, a stereo recording for the left and right, maybe something like a mortar in the sub for the weight, and then the retort (the decay of the gun off the hills or canyons).

Sometimes we need to go out and record sounds, such as when cars started changing to electric.  We had all these wonderful sounding V8s but then we needed to have our hero in in a Tesla or Prius.  All new sounds had to be recorded. We also use wonderful new software from iZotope and Waves that allows us to clean up noise on the dialog track before it gets to the mix stage to help speed things up. 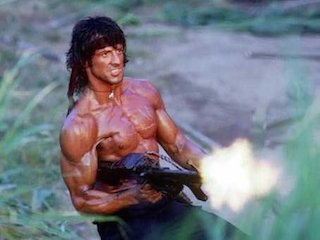 Sound for the small/tiny screen on shows like Togetherness (HBO) or Casual (a Hulu Original Series) has many more variables. Is the viewer listening in a home theater, on a television, on a computer, or with headphones?

If it is a home theater, then we want to provide the closest thing we can to a movie experience, with dynamic range and panning. However, here we also have to deal with commercials. We need to limit the dynamic range so that the dialog is consistent while the sound effects are not too loud and so that the commercials do not seem too loud.

At the mix, we are usually limited on the amount of tracks that we can take to the stage, not because our tools can’t handle what we take for a feature, but because we have to move so fast in the limited mix schedule. The edit schedule for TV is usually a show per week, give or take a day or two as opposed to a feature edit which is four or six weeks to several months because there is not always a deadline. The typical mix schedule for a half hour TV drama is one to two days, for a one hour show it is three or four days. I think these days, most people would be happy with a day per reel for pre dubs and one or two days for the final mix.

Yes, I said reels. Even though digital will allow us to work on a full-length show, we still think in 15-20 minute segments, or reels. Before digital we were limited to approximately 20 minutes per reel of film.  Movies were typically made up of five to six reels.  That amount of time makes for a good barometer of time. So, if it is a five-reel show, we would like five days of dialog pre-dub (working only to clean the dialog so it is as intelligible as possible), five days of effects (effects, Foley, and backgrounds), 7-10 days of final mix altogether with the music, and then two days of playback and fix.

To handle the amount of sound work for a TV show now, it means that the editors have to make decisions on what sound effects can be combined beforehand or not used at all.  For example, it sounds like a small thing but, in features we used to send alternate choices for a door close.  In TV we don’t have time to choose during the mix so we just send one sound. Our job is to make every sound count while requiring minimal time during the mix.

We mix every show in 5.1 surround and then matrix it down to a stereo pair. We mix much like we do for a feature: left, center, right front speakers, a subwoofer, and stereo surround speakers.  That is then matrixed down to a stereo pair that is compatible with mono.  It can also be spread back out into a LCRS (left, center, right, and mono surround.  No subwoofer.)  We cannot lean on the panning or the subwoofer as much as in features because they will not be perceived as much in the stereo mix with two small speakers.  The large majority of people listening on a TV will listen with the two small speakers on the TV as opposed to a setup with left, center, right, subwoofer, left and right surround. So, the stereo mix is just as important as the full 5.1 mix because so many people watch the shows on a television or on their mobile device with headphones. What is lost with this is the spatial panning you can do from front to back or use of the subwoofer to add weight because they are non-existent.

Perry Robertson is the founder and owner of EarCandy Post in Los Angeles.