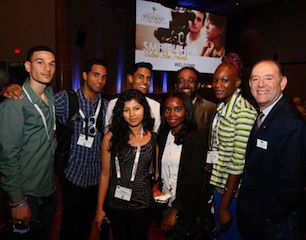 "The SMPTE-HPA Student Film Festival is growing into a rich showcase of student work, with outstanding short films being submitted from around the world," said SMPTE president Robert Seidel. "It's always exciting to see the fresh techniques and ideas put forward by student filmmakers, and I'm sure this year will be no exception."

The SMPTE-HPA Student Film Festival highlights the creative use of technology by young filmmakers, as it is employed in the art and craft of storytelling. The festival is open to full-time students currently enrolled in an accredited college, university, or film school. This is an international festival, and entries from all parts of the world are encouraged. As the festival focuses on technology, students should ideally major in an area that emphasizes engineering, science, advanced technologies, or fundamental theories associated with motion imaging, sound, metadata, and workflows consistent with SMPTE's and HPA's fields of interest.

Films must adhere to time limit requirements, which include all main titles and ending credits.

Students may submit films for consideration in one of the following six categories:

Best creative use of entertainment technology to engage the audience in the story – narrative format. (Maximum five minutes)

Best creative use of entertainment technology to engage the audience in the story – narrative format. (Maximum 30 seconds)

Best use of mobile device or tablet to convey a story – narrative format. (Maximum three minutes)

All entries recognized as Official Selections are automatically eligible for the 2016 SMPTE-HPA Student Film Festival Audience Award, which is voted on by festival attendees during the event and presented at the conclusion of the evening.

"The HPA and SMPTE are dedicated to supporting the newest members of the motion-imaging industry through a variety of educational initiatives and networking opportunities," said Leon Silverman, president of the HPA. "This film festival is unique in that it celebrates the creativity and ingenuity that this new generation of filmmakers brings to our industry."

In addition to the submitted film, all narrative film entries, except those in the VR category, must be accompanied either by a behind-the-scenes video demonstration (two minutes maximum) of how technology was used to enhance production, or by a brief written description (150 words maximum) of the same. Further details about each category are available online at www.smpte.org/film-festival.

Entries will be accepted now through June 27.

To be eligible to submit a film, students must have completed four courses toward their major course of study and be in good academic standing. They must present supporting documentation and identification in order to qualify.

There is no fee to enter, and SMPTE membership is not a prerequisite for submission of a film. However, students may join as student members of SMPTE for just $10 — or for free if this is their first year of membership — when they apply via the Student Membership Challenge (SMC). Travel to the festival is not sponsored by SMPTE or HPA.