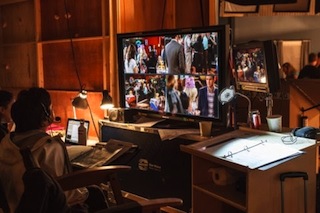 SIM Digital recently provided production and post-production equipment, services and support for the debut season of Spun Out, a new multi-camera sit-com from CTV and Project 10 Productions. SIM designed and built a complete file-based workflow for the show that extended from the cameras through final delivery and included such innovative features as real-time delivery of full-resolution camera media from the set to the editorial team.

Shot before a live audience at Pinewood Studios in Toronto, Spun Out stars Dave Foley (Newsradio, Kids in the Hall) as the head of a public relations agency. Jeff Biederman (Life with Derek) and Brent Piaskoski (According to Jim) are co-creators, writers and executive producers; Brian K. Roberts (Everybody Loves Raymond) is co-creator, executive producer and director; Andrew Barnsley is executive producer.

The show is slated to premiere on CTV this winter.

Spun Out is CTV’s first live multi-camera show to be produced with a complete file-based workflow. SIM Digital designed a multi-camera system consisting of four Sony F900R cameras that fed a pair of Cinedeck digital disk recorders housed in a custom-built flight pack that became the show’s master control room. Camera media captured by the Cinedecks was recorded in real-time to Avid ISIS shared storage system employed by the show’s editorial team (located in a cutting room adjacent to the control room) and to G-Raid drives for back up.

Editorial media was recorded as Avid native, DNX-175X files, providing editors with access to full-resolution camera media literally moments after it was captured on stage. “The advantage of this workflow is that we don’t need to copy camera media. There’s no transcoding, no format conversion,” explains Dave French, SIM Digital director of post-production engineering. “As soon as it’s shot, editorial has access to it and can begin cutting.”

A third Cinedeck recorder was employed to produce show dailies. Feeds from the four cameras were recorded in quad-split display and made accessible to the production team as iPad-compatible files through a web-based dailies application service. “The director and producers could view their dailies almost as soon as the shoot day was over,” French says.

The efficiency of the show’s workflow was further enhanced by several innovative steps applied in production. During initial camera tests and the pilot episode, Video Coordinator James Clarke developed in-camera “looks” for the show’s various sets. Those looks were reapplied (with minor adjustments) during the production of the subsequent episodes, allowing them to be posted “as shot” with minimal additional color correction. Additionally, Clarke, with the aid of SIM’s engineering team, replaced the standard cabling used with the Sony cameras, with lightweight fiber cables and replaced the standard camera controls with Copperhead 3200 fiber optic camera transceivers. 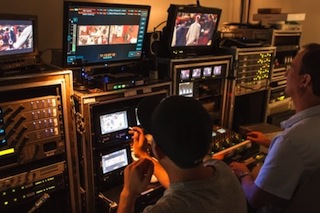 “This newer technology made it quick and easy to reposition the four studio cameras between sets during the taping of the live show,” Clarke explains.

The workflow was fast, efficient and resulted in significant cost savings by eliminating the need to copy and transcode camera media. “It was a complex workflow with tons of cable and equipment,” notes Project 10 producer Colin Brunton, “but the whole production went very smoothly with barely a glitch. The SIM team was very dedicated and passionate about making it work.”

Having an instantaneous link between production and editorial also had creative benefits. “It was fantastic,” says assistant editor Cory Augustyn. “If the director wanted to review a shot, we could add it to a scene and send it right back.”

SIM affiliate PS Production Services provided lighting and grip equipment for the show, including specialized sound booms called “prams” used to rapidly move microphones over the performing talent without obstructing the view of the studio audience.

Post-production work is currently ongoing at SIM via their post-production division, Bling Digital in Toronto. Bling is facilitating the online edit, final color grading and finishing.

Based on reaction to the show’s pilot, hopes are high for Spun Out. “It’s a big show for us and it was great to work with SIM and its partners on a project of this scale,” says Brunton. “We all believe that this show is going to be a hit…one that will go on for years.”