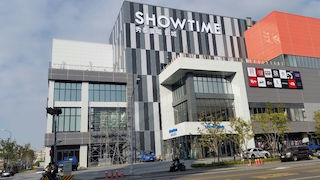 “As one of the leading cinema chains in Taiwan, we are strongly committed in offering the best-in-class cinema technologies for our patrons to enjoy the finest visuals and audio on the opening of our newest cinema complex in Taichung,” said Willy Liao, general manager, Showtime Cinemas. “We’re convinced that Christie’s highly acclaimed projection and audio solutions are perfect for deployment in this cineplex. Not only does the Christie RGB laser projection system with EWD deliver the best visuals, the unique design and amazing acoustics Christie Vive Audio also provides unmatched surround sound for a spectacular cinematic experience.”

The installations for Showtime Cinemas – an existing Christie user – are undertaken and completed by Christie’s longstanding Taiwanese partner, Dacoms Technology, with support from Showtime and Christie’s technical teams.

Emily Hong, president, Dacoms Technology said, “We’ve been working with Christie for many years and have always been very impressed with the company’s constant technological and groundbreaking advancements in digital cinema. Our team members involved in this major project in Taichung have benefited much from working with Christie’s highly proficient technical team, and are thrilled to bring the latest RGB laser and immersive audio technologies to cinema audiences in Taichung.”

Lin Yu, vice president, Christie Asia Pacific added, “We are delighted that Showtime Cinemas has chosen our advanced cinema projection and audio solutions for its newest cineplex located in Taichung. This is a clear testimony that our field-proven and robust cinema solutions, in particular RGB laser and Vive Audio, are the pinnacle of quality versus any competitive solution. This is why Christie has become the preferred choice for a premium 3D cinema experience for an increasing number of leading exhibitors in Asia and around the world.”