Shooting Remotely in a Pandemic 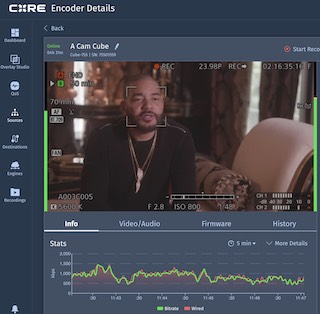 When Graham Sheldon got the call from showrunner Johnny Fountain to be his DP for remote production on the new Behind Every Man series, he felt up to the challenge. Sheldon’s technical background, and his willingness to try new and potentially unproven shooting methods gave him the confidence to capture the interview-heavy documentary-series amid COVID-19 restrictions.

Behind Every Man shines the spotlight on the strong black women behind famous men, focusing on the passions, struggles and sacrifices they have endured to support the men they love. Hosted by Melody Holt, featured couples include: Tammy and Kirk Franklin; singer-songwriter Ne-Yo and his wife Crystal Smith; Wyclef Jean and Marie Claudinette, Usher and his mother Jonnetta Patton, and many more.

Each of the ten episodes includes five-seven interviews of the various personalities from their own homes, sometimes across the city, state, or country. Under normal conditions it would be a challenge, but in 2020 it also had to be safely COVID-19 compliant. And it had to look fully professional—computer-style interviews would not cut it.

“There could be no crew members on the scene. All equipment had to be set up by the talent and their COVID-19 pod in their house,” says Sheldon, “We had to make sure it was easy for non-camera pros to set up, right out of the box.”

Sheldon will be discussing emerging technology and tactics that make virtual production a reality in a live session, CS Presents Virtual Production: The New Wave of Digital Collaboration on January 7 at 10 a.m. PST. To sign up for the free live chat visit http://link.cs.inc/gsheldonown

Keeping it simple was the mandate. For camera, Sheldon chose the Canon C300 MK II thanks to its quality of facial auto focus. Along with it he selected the Sigma 24-70mm lens because he knew he could rely on its autofocus. “We shot in [ultra-high definition] so post could have autonomy over composition.” To avoid memory card swaps Sheldon went with the large SanDisk Cfast 256 GB. Their simple audio kit would be set to “auto”.

For the critical real-time streaming and monitoring he called his friends at Teradek. “I needed a level of confidence that it would work in real production scenarios with people who were particular,” he said. “I knew that the Teradek team would have it figured out.”

“At the time Graham's production was unique because there wouldn't be a professional film crew operating the equipment with the talent,” said Andrew Ng, Teradek’s creative solutions’ director of marketing. “We turned to Cube 755 as our most versatile solution to provide solid reliability, premium quality HEVC encoding, and encrypted security. The biggest challenge wasn't the technology requirement but ensuring the level of confidence expected by producers familiar with Teradek's zero-delay on-set solutions. After reviewing the production workflow variables, we were able to deploy a virtual workflow that could be scaled as needed.” A Cube would be pre-configured to each camera before arriving at the locations. At its destination it would just need to be plugged into power. 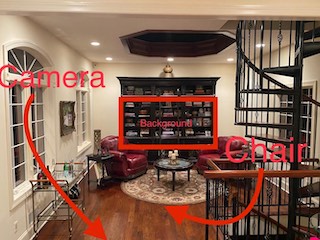 The remote video was accessed via iPads, Apple TVs, and web browsers using Teradek Core, the cloud-based streaming management platform. Sheldon was able to direct photography and also provide the rest of the production with a real-time virtual video village experience.

The 12 episodes were scheduled to shoot in April and May 2020. They prepped five identical equipment packages destined to travel throughout the US, to shoot multiple episodes simultaneously. The camera team was small. Melissa Kirchhoff, the AC prepped the packages and did the turnarounds. “There was a lot of turn-around work in a rental house that was otherwise empty due to the shutdown,” says Sheldon. They met in person only once during prep.

“We color-coded all the buttons and came up with a laminated card so if they were visual it would make sense. If they were audial, they would listen to us,” he continued. To test their system, they sent a kit to production manager, Nicki Marshall and walked her through it.

To prep the interviewees Sheldon connected with each individually prior to gear arrival. To scout, he had them send photos or video of their living space so he could plan the best location and lighting setup. “We looked for controllable light and depth in the room. They couldn’t be against the sun and we needed good depth of field—no flat-looking announcer shots. We also walked them through Internet speed checks to determine if we needed to pre-prep Teradek Node modems to assure reliable cellular connectivity, or if we could get set for Wi-Fi.”

Sheldon says a key point was to manage expectations. Even the stars had to get in the right headspace for the level of work they would have when the 6 Pelican cases arrived on their doorstep. That’s when he and Kirchoff would pop on Zoom and run them through setting up the camera packages. 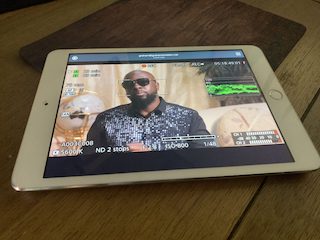 Sheldon was relieved at the enthusiasm. “Sometimes family members in their pod would help,” he said, “a daughter, sister, uncle, assistant. For the most part no one had production experience. Everyone from an 80-year-old to a 15-year-old was able to do it.” Set up took from 30 minutes to an hour and half.

Sheldon’s main workload was during interview setups—especially when there were multiple interviews in the same location requiring different lighting plans. “Once everything was lit, we were mostly on autopilot from the DP perspective. My AC Melissa Kirchhoff would cover for me when I bounced between different interviews,” he adds.

When the interviews started, Sheldon viewed from his office in Southern California using his computer monitor, iPad, and phone: one on Zoom, one over Slack, one on Core TV which he calls “user friendly.” He invited the production team stakeholders to view the camera stream on their own devices from their various locations.

How did Graham Sheldon react to using this new workflow? “The talent really got into participating in the production, so it all worked out. It’s amazing what you can do if you are willing to embrace the craziness of 2020.”

Behind Every Man is currently airing and streaming on OWN.