Shooting Before the Flood 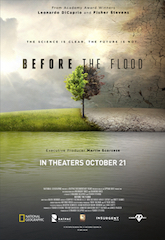 In the late winter of 2014, Leonardo DiCaprio called actor and documentarian Fisher Stevens with an idea: he wanted to collaborate on a documentary that would explore the causes and effects of climate change around the world, and the urgent need to transition away from using fossil fuels — and he wanted to get started right away. They chose Antonio Rossi to be their director of photography.

DiCaprio and Stevens had known each other for years through acting circles, and then became better acquainted when they both participated in Mission Blue, a trip to the Galapagos honoring marine biologist and 2009 TED Prize winner Sylvia Earle.

Stevens had already made several acclaimed documentaries about environmental issues, including 2014’s Mission Blue (co-directed with Robert Nixon) about Earle’s campaign to create a global network of protected marine sanctuaries, and last year’s climate change film Racing Extinction, which he produced along with Olivia Ahnemann. Probably his best known work is The Cove, a documentary he produced that exposed the secretive and brutal practice of dolphin hunting in Japan, for which he shared an Academy Award with director Louie Psihoyos.

The filmmakers traveled to five continents and the Arctic Circle to film cites where climate change has altered the environment, capturing beautiful but chilling footage of everything from melting glaciers to stripped rain forests.  They spoke with scientists and world leaders including President Obama and Pope Francis.

Among the sites they chose to visit are the Great Canadian Oil Sands in northeastern Alberta, Canada, where Suncor Energy produces 350,000 gallons of synthetic crude oil through a process that emits greenhouse gases and wreaks havoc on local ecosystems; Sumatra, where palm oil farmers are burning oxygen-producing rain forest habitat at an alarming rate, releasing huge amounts of carbon into the atmosphere; and the Central Pacific island republic of Kiribati, which faces an uncertain future due to rising sea levels. The vast nations of China and India were also on the filmmakers’ must-see lists. “China is the largest emitter of carbon in the world right now, so we wanted to talk to people there,” said Stevens. “And then we wanted to get the story in India, because of its growing population. New Delhi is the most polluted city in the world and we wanted to see how they are responding to the issue of climate change.”

By far the most difficult scenes to shoot were in the forbidding terrain north of the Arctic Circle, first on Canada’s Baffin Island and then in Greenland, where rapid ice melts provide startling evidence of how quickly the climate is changing.

“You can’t just show up and start filming in the Arctic,” explained Stevens. “It’s a huge trip and you need support.” Fortunately, the filmmakers learned that their mutual friend National Geographic Explorer-in-Residence Enric Sala was on an expedition to the Arctic for National Geographic. They were able to piggyback their shoot onto his trip during a period when DiCaprio had a few days off from shooting The Revenant.

DP Antonio Rossi was involved with the production in its early stages. While those location offers widely different temperatures and challenges they had one thing in common: “We were blessed with beautiful scenery and beautiful light,” he said.

Shooting actually began while DiCaprio was still involved with the production of The Revenant. “Early in the process we thought we were shooting for IMAX,” Rossi said, and in many ways that set the tone visually for the whole shoot. He began shooting in 4K Raw and eventually moved to 4K ProRes.

Over their two-year production period, Rossi used a mix of Canon EOS Digital Cinema cameras, starting the production on a C500 (shooting 4K Raw to an Odyssey 7Q+ external recorder) and an 1D C (often rigged to a MoVI stabilizer). 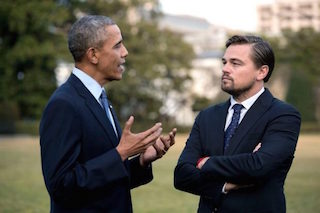 When the C300 Mark II was released, Rossi adopted it as his A camera, in a transition he called “seamless.”  Rossi said he was excited to have internal 4K in conjunction with the signature Canon color space that defined the look of the film.

“Most of what we shot was handheld,” said Rossi, and most of the movie was shot using available light. “We were blessed with beautiful light.” Stevens didn’t want the film to have a static look. Insisted that the interviews be shot handheld. Rossi said shooting handheld for two hours can be demanding but he supported the idea and praised Stevens as a producer.

For the same reason, Stevens wanted to avoid the traditional sit-down interviews of many documentaries in favor of other approaches to give the film energy. DiCaprio’s conversation with President Obama, for example, took place on the White House lawn. There, Rossi followed a template that had developed over the course of the shoot. He would place the person being interviewed in the best light available. His reasoning? “Leo looks good in any light.”

After two years of shooting they wrapped in July. Before the Flood premiered on National Geographic channel October 30 in 171 countries and 45 languages. Rossi moved from there to shoot the CNN series Death Row Stories with Susan Sarandon, which just wrapped its third season. The show focuses on the justice system and examines cases where convicted people may actually be innocent. Next up for Rossi is Marathon, a documentary about the Boston Marathon bombing.