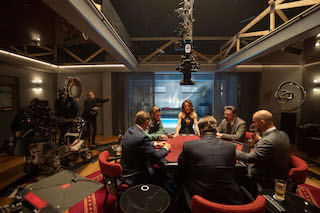 For award-winning cinematographer Aaron McLisky, ACS, and for Academy Award winning director, co-writer, and leading actor Russell Crowe, shooting the psychological thriller Poker Face came down to two things: achieving a modern look that maintained a painterly quality as well as choosing the right aspect ratio to capture the ensemble cast in a single frame. One other challenge on the set was having a director who was also the leading actor.

“Russell is an intelligent and seasoned filmmaker who’s worked with the best of the best,” said McLisky. “But for anyone this would be a difficult challenge, with script amendments, location changes and design changes. It’s a lot, not to mention COVID. Russell drew on his wealth of knowledge and experience to steer the course.”

McLIsky had come to the project late in its development as director Crowe had also just come on board and was in the process of amending the screenplay. The original director had family health issues, so had to leave the project. From the moment of agreeing to lead the project, Crowe himself was only given five short weeks before cameras would roll. Originally set in Miami, Crowe was working to reimagine the story in his hometown Sydney, Australia. After a brief chat with Crowe, Mclisky began working on a look book to reimagine the film with Russell’s vision in mind. Crowe referenced a lot of historical Australian painters such as the atmosphere of Clarice Beckett to the modern abstraction of Ben Quilty.

“I wanted an image that wouldn’t look too clean, but softer and atmospheric,” said McLisky. “I looked at a lot of different anamorphics, and at the time the Cooke anamorphic full frame was relatively new in Australia but becoming more readily available.” 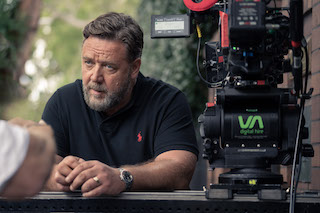 “As someone who started on the Cooke S4s early in his career, I really appreciated the Cooke Look plus its pleasant skin tone and build quality. It just so happened that Warren Day and Video Australia in Sydney had a set of the anamorphic full frame lenses that I could test. I took them to our main Poker Room set at Fox Studios Australia for some in-depth testing.”

When Mclisky projected the tests in a theatre with Crowe, they both could see the qualities they desired. “The way the sharpness, contrast and falloff made it feel very painterly instantly connected with Russell and myself. We had to go with Cooke,” McLisky said.

In Poker Face, Crowe plays a billionaire gambler who offers his best friends the chance to win more money than they have ever dreamed of. However, in return, they will have to give up the secrets they have spent their lives protecting and will learn the true nature of what is at stake.

Video Australia provided McLisky with three Arri Alexa Mini LF cameras (shooting 2.39 at 4.5K open gate for 4K DCI distribution) and three sets of Cooke lenses, including every Cooke Anamorphic/i FF available from the rental house: an A camera set consisting of the Cooke Anamorphic/i FF 40mm, 50mm, 75mm, 85mm MACRO, 100mm and 135mm; the B camera set with the 40mm, 50mm, 75mm and 100mm; plus a C camera set with a Cooke 35-140mm Anamorphic/i Zoom and Cooke S7i FF sphericals for pick-ups, which were shot by Jules O’Loughlin, ACS, ASC. 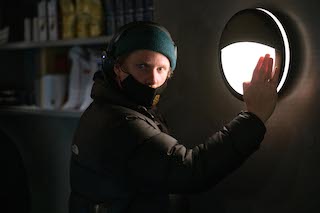 “That 85 macro is just fantastic and became the lens of the shoot,” said McLisky, who utilised the lens as a macro and straight 85mm prime. “As we came in for a close up, Russell would say ‘big head, bigger head,’ he wanted the camera close. Being able to move from 5 feet to an eyeball...Russell loved that. Being able to use the lens in that way meant we could get a lot of those intimate shots very quickly. The 85mm as well as the 135mm were the primary lenses, and I also loved the 50mm and 75mm for the wider dialog sequences.”

McLisky said, “The C camera was mainly on the 35-140mm Cooke anamorphic zoom for principal photography, but for pickups, Jules used the S7s.” That, of course, brings up the issue of matching the sphericals to the anamorphics.

“You can’t tell,” said McLisky. “That’s why everything was Cooke and it made me incredibly happy, although I was a bit nervous when putting the lens package together. But instinct told me that the Cookes would all match with the Cooke Look and how each lens would react to the production design. When it came to the grading, it was very easy to create a consistency between the cameras. They married together perfectly.” 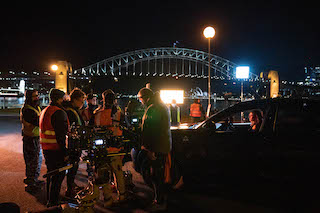 The production design, as well as the look up tables created with colorist Jamie Hediger, were all based on conversations with Crowe, according to McLisky. “Russell wanted a deep red and black theme throughout the film referencing the playing cards and his private art collection – a lot of the art in the film is Russell’s personal art. Jamie looked at Russell’s art to inspire the LUTs.”

McLisky said, “Crowe constantly challenged the cast to find a truth in the film, to make the performance personal. We spent a lot of time talking about his relationships with his friends and what his level of success meant to him. That served as an emotional entry point to understanding Russell’s connection to the characters. Working with Russell was inspiring, as he is very articulate and clear about what he wants. For example, Russell was adamant about us using three cameras. His experience with multi-cam films gave him a sense of comfort – to be capturing the scene as a stage play and to allow for flexibility of performance and safety in the edit.”

Poker Face isn’t so much about the game as it is about the people who play it, as McLisky explains: “It’s what it means to read people. Once you know the math of the game, it’s all about how to interpret the players.”

But how do you shoot a poker match that’s not really about a poker match, but the people?  “This can’t be mechanical,” he said. “It’s emotional with faces and who’s telling the truth. Let the story be told and be sympathetic to the characters.” 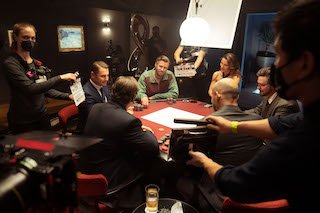 To that end, Crowe shot everyone else first to quarterback the scene and then he shot himself, according to McLisky. “He’ll do two takes of himself as he directs himself in his head. And then when he’s in the scene I’m the only one watching all three cameras – with the /i Tech being incredible in the sense that I could monitor everything technical from each camera as well as the performance. In addition, Russell had a monitor on set so that he could see the scene from within the scene.

McLisky looked at a lot of modern poker matches that use lipstick cameras, but Russell wanted Poker Face to be less modern and more cinematic and classical. “The entire set was lit with mainly practical LED sources with modern fittings in the room, but I had to create a top light for the poker table, so it looked like a room in a billionaire’s home and not at a casino. For that, I used an 8x8 fully controllable softbox, hidden above a removable ceiling piece, so when shooting the table in close we could soften the faces and the rest of the room would just fall away.”

A final benefit of Cooke’s i/Technology for McLisky was in post. “There’s [visual effects] in certain scenes, extensions and lots of clean ups. But with all the lens data readily available, I was never asked to provide anything because it was already there. That makes things go so much smoother.”

All photos by Brook Rushton.