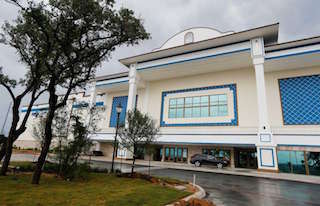 Over the past decade digital cinema technology has spurred the transformation of movie theatres from the traditional assembly line model – buy your ticket, buy your popcorn and soda, take your seats, watch the movie, and exit – into entertainment centers where people are encouraged to linger and enjoy a variety of activities, enjoy a nice meal and, of course, see a movie. While Santikos Theatres has seen its share of industry firsts its newest venture, opening today, is more than simply a new first. Yes, the Casa Blanca in San Antonio, Texas, is the first all-laser projection movie theatre in the world. But, more than that, it sets a very high standard for what a movie theatre in the 21st century can be.

“The Santikos Casa Blanca Theatre is a jewel in the community with its stunning architecture, the best projection and sound technology available and the biggest movie screens in Texas,” said a justifiably proud David Holmes, CEO of Santikos Entertainment. “Moviegoers will enjoy in-theatre dining with an upscale menu and recliner and oversized seating, and Santikos legendary guest service.”

The Casa Blanca features Barco Laser Projection on all 16 screens, along with Klipsch speakers and Dolby Atmos Surround Sound in the premium rooms. Santikos also recently extended its five-year strategic partnership with GDC by signing a new agreement to install GDC integrated media blocks in conjunction with its transition to all-laser projection. Under the agreement, GDC Technology will deploy a total of 70 units of its SX-3000 Integrated Media Block, which provides 4TB of storage, with laser phosphor projectors. 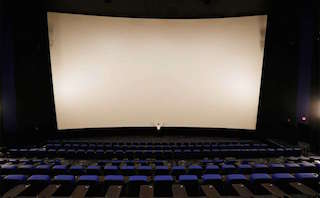 Technology has always played a major role at Santikos. Holmes said from the very start the founder, Louis Santikos, understood that “when the lights go out, we all show the same movies and that technology is a great way to differentiate yourself. People do see the difference.”

The Casa Blanca features two auditoriums with movie screens that are 90 feet wide, four auditoriums offering full service food and drink service at your seats, luxurious recliner seating in six auditoriums and oversized seating in the others, for a total of 2,850 seats in 130,000 square feet. The theatre also offers automated ticket services both online and at the theatre, a video arcade, a high-end café, a full-service bar, and 16 lanes of regulation bowling. And there’s more to the bowling lanes than just bowling. Holmes said there are software packages installed with each lane that, in addition to keeping the score, offer several games. He said those games enable people to have a good time no matter what the bowling score is.

Holmes said no virtual print fee agreements were involved in building Casa Blanca. “We were able to finance with working capital and outsider lending from local financial partners,” he said. 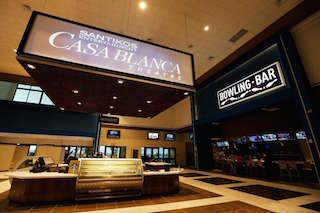 When I spoke with Holmes a few days before the Casa Blanca opened, I suggested that the term movie theatre didn’t seem to adequately describe the new complex. “Well, that’s certainly the idea,” he said. “We aren’t just a place to show movies anymore. We’re competing for the family’s entertainment dollar.”

He understands that the motion picture industry is in the process of reinventing itself and, while Hollywood movies will likely always be the heart and soul of exhibition, Holmes said the basic business model has remained much the same as it was when Santikos first opened in 1911. He suggested it might be time to rethink that model. “We don’t control the manufacturing, distribution or timing of the product we sell,” he said. He paused and seemed to be searching for the proper way to describe the situation. Finally, he said, “It’s an interesting model.”

While Santikos offers a range of movie options for people of all ages and tastes, including San Antonio’s only art house cinema, these days Holmes is interested in further exploring event cinema. The company has already offered some college sporting events and the Metropolitan Opera and Holmes would like to expand that to include more kinds of programming. 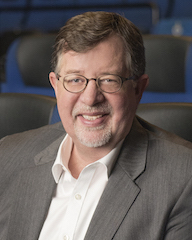 If other theatres can claim to match Santikos in technological prowess, there is one aspect of the company’s business that remains unique: As part of the theatre group now organized under the John L. Santikos Charitable Foundation, a fund of the San Antonio Area Foundation, the Casa Blanca and all Santikos Theatres exist for the sole benefit of the community, making Santikos Entertainment the only theatre group in the world that operates as a social enterprise.

When John Santikos, the son of the founder, died in 2014 he left behind $600 million in a trust. “He wanted to create an economic engine that would plow money back into the community,” Holmes explained. “John always wanted to give back to the community.”

After the company has set aside money to pay its more than 1400 employees, for maintenance and a fund to finance future growth, the rest is transferred to the trust. That money is used for a variety of purposes including direct support for people in need, early childhood education and medical care. Holmes gave the recent example of a San Antonio neighborhood that flooded when a nearby river overflowed its banks. Thanks to the trust Santikos was able to write a six-figure check to help the families whose lives had been disrupted. 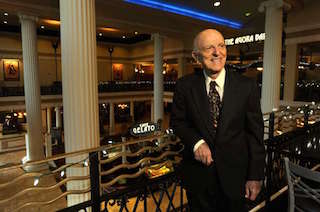 “We all have a stake in creating a vibrant and prosperous community,” said Holmes. “You can see a movie anywhere, but every time you see a movie at a Santikos theatre, you become a vital part of our charitable legacy because all of the economic benefits associated with our operations are reinvested directly back into our community.  Most companies support local charity programs as part of being a great corporate citizen, but we are the only theatre group that exists solely for the purpose of supporting our community.”

The company currently contributes roughly $243,000 a week to the trust. Holmes said that sum will grow in the next few years to reach $400,000 a week and eventually will total $30 million a year.

For the people of San Antonio this presents an interesting choice. Holmes said he often wonders, “How does the trust affect the competitive atmosphere? Would people prefer to know that buying a ticket at Santikos contributes directly to their community? Or would they prefer to support another company’s bottom line?”