MOPA Upgrades Thanks to Christie 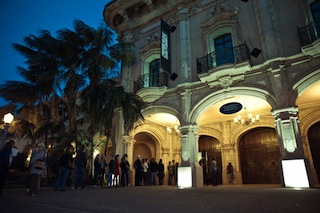 Christie has donated projection technology and installation services to the Museum of Photographic Arts in San Diego.

Christie Professional Services team installed a Solaria One projector and an SKA-3D cinema processor. The system replaces a first-generation Christie digital cinema projector. It will be used in the museum’s 226-seat Joan and Irwin Jacobs Theatre a nonprofit venue in San Diego.  Beloved by the local community, MOPA is host to diverse film festivals and screenings reaching more than 10,000 people annually.

Founded in 1983, MOPA has established an international reputation of excellence through its presentation of high quality exhibitions, lectures, publications and films. Its mission is to inspire, educate, and engage broad audiences through the presentation, collection, and preservation of photography, film, and video. MOPA is one of the only museum facilities in the United States dedicated exclusively to lens-based media, with holdings of over 8,000 photographs by 700 artists and a 20,000 volume research library, making it a one-of-a-kind destination for scholars, researchers, and photography and film enthusiasts of all ages.

Christie’s CEO Jack Kline was inspired by MOPA’s educational role in the community, especially its desire to expand visual literacy for people of all ages. Driven by Christie’s commitment to good corporate citizenship and support of worthy causes in the community, the company’s generous gift will benefit local film festivals, film directors and producers, and community groups, who partner with MOPA to bring important local and international independent films to San Diego’s audiences.

“Community giving has always been a high priority for Christie, especially when it comes to the advancement of education and the arts,” said Kline. “Our acclaimed projection technology will ensure that MOPA will not only continue to be a one-of-a-kind destination for photography, but also serve as a resource where future generations of students can enjoy and appreciate the cinematic arts as well.”

Deborah Klochko, executive director at MOPA, said, “When our theater opened in 2001, we selected the finest projection and sound equipment available, including a Christie projector system. After more than a decade of near-constant operation, the current system was still serving the museum, a testament to the outstanding quality of Christie products. When the time came to replace our projector to meet current industry standards, it was only natural that we turned to Christie once again for their remarkable technology and reliability.

“The digital projection capabilities provided by Christie, combined with our ability to project 16mm, 35mm and other specialized formats, make MOPA one of the premier nonprofit venues for cinema in Southern California,” added Klochko.

Christie's donation was joined with a $20,000 grant from Las Patronas, a philanthropic organization that has donated more than $17 million to San Diego organizations since 1946.

“Installing the equipment for the Joan and Irwin Jacobs Theatre involved the same technical and design challenges that many other multi-use facilities experience, where space is at a premium and the ability to project content from a wide variety of sources is paramount,” said Sean James, vice president, Global Professional Services. “The all-in-one nature of the Christie Solaria One projector, with built-in Christie IMB Server, Touch Panel Controller and playlist software, helped meet the space requirements – while also providing a full-featured projection system.”