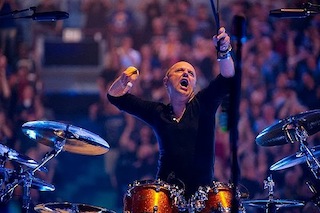 Hula Post Production provided 3D editorial gear and space for Metallica: Through the Never, the new feature-length 3D concert film released worldwide this month by Picturehouse. Editor Joe Hutshing (Savages, Almost Famous) and his crew spent more than eight months at Hula’s facility in West Los Angeles cutting the film, which blends footage from Metallica concerts in Edmonton, Alberta and Vancouver, British Columbia, with a narrative story about a roadie on a surreal odyssey to recover a mysterious bag. Metallica: Through the Never will screen both in digital 3D cinemas and IMAX theaters.

“We were happy from the moment we arrived,” said Nimród Antal, the film’s director. “Hula’s facilities are beautiful and the equipment, top notch. They supported and gave us love throughout the process.”

Hutshing and his crew had an incredible amount of source material to work with in crafting the finished film. The live concerts were shot with pairs of Arri Alexa cameras mounted in Cameron Pace Group 3D rigs. More than 30 camera set-ups were used to capture each song in the concert.  “The amount of source material was almost mind-numbing,” said Antal, “and we faced the additional challenge of weaving in narrative material. Most films follow a straightforward path through editorial; this was a maze.”

The ability to quickly review scenes in 3D made the editorial process much easier. Antal and Hutshing were able to determine immediately how well the cut was working in 3D and make any necessary technical or creative adjustments. “I had some concerns about the technology, as this was my first 3D film,” Antal said, “but they were quickly alleviated because I was surrounded by experienced and wonderfully talented people.”

The result is an engaging and immersive experience that captures the power, electricity and spectacle of a live Metallica concert. Following its world premiere at the Toronto International Film Festival, one critic wrote that “Metallica: Through the Never should proudly take a position alongside classic films like Martin Scorsese’s The Last Waltz and Jonathan Demme’s Stop Making Sense.”