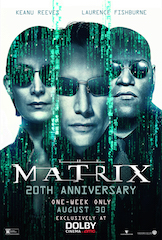 Dolby, Warner Bros., and AMC Theatres today announced that, in celebration of the 20th anniversary of The Matrix, winner of four Academy Awards including Best Sound, audiences across the U.S. can experience the Warner Bros. Pictures’ and Village Roadshow Pictures’ film in the more than 135 Dolby Cinema at AMC locations around the U.S., beginning August 30.

“Bringing The Matrix to life in Dolby Vision and Dolby Atmos pays homage to the masterpiece that the Wachowskis created 20 years ago,” said Doug Darrow, senior vice president, cinema business group, Dolby Laboratories. “Movie lovers will be able to see and experience unforgettable sequences like bullets flying in slow motion with the utmost detail - transforming one of the most iconic sci-fi films of this generation.”

“Warner Bros. is proud to re-release the groundbreaking motion picture The Matrix, for the first time in Dolby Vision and Dolby Atmos,” said Jeff Goldstein, president, domestic distribution, Warner Bros. Pictures. “Dolby Cinema offers moviegoers an unparalleled sense of realism in how they experience this game-changing film, making it a must-see event, whether for the first time or a return to The Matrix.”