Lost in the Pacific to get Same-Day Worldwide Release? 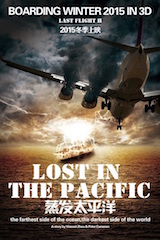 Arclight Films says pre-sales for the theatrical release of Lost in the Pacific, the first Chinese 3D Sci-Fi action adventure film in English, are strong and is speculating that it could very well be the first Chinese independent Sci-Fi film to receive a same-day release worldwide.

“China’s film industry is witnessing increasing box office sales both at home and overseas,” said Elliot Tong, head of Asian sales and acquisitions for Arclight Films. “A film like Lost in the Pacific has all the makings of an international success story on a global scale.”

Director Vincent Zhou also hopes the film will be able to reach more audience worldwide. “It will be an extraordinary visual and acoustical experience with a unique adventure story for the global audience without language barriers,” he said.

“Distributors have a wonderful opportunity to offer audiences something fresh and exciting,” continued Tong. “Buyers from all territories see enormous potential in Lost in the Pacific. There’s not only fierce competition between Chinese films and American films but also between different Chinese films with the goal of being released to the American marketplace, and I firmly believe in Vincent Zhou and the his international team highly-acclaimed professional collaborators.”

Releasing a film in China, the United States and across the world can be ambitious for any Chinese film, but Arclight Films is confident in Lost in the Pacific. Although China’s movies have found their niche market in Mandarin-speaking communities in cities such as Los Angeles, New York and Seattle as more Mainland Chinese films getting released in United States, Lost in the Pacific is different from other Chinese films. The film is not only aiming to release in major cities around the world, the company believes it’s perfectly positioned for a wider release as it is an English-speaking film and lacks a significant amount of language and cultural barriers than many other Chinese films to date.

Having represented many Chinese films including Special ID, Wolf Warrior, and Snow Girl and the Dark Crystal, Clay Epstein, senior vice president of sales and acquisitions for Arclight Films said, “Lost in the Pacific is extremely marketable and holds significant commercial value due to its international casting, story telling and the quality of production.” 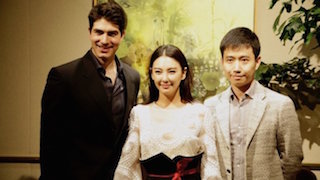 Starring Brandon Routh (Superman Returns) and Chinese actress Zhang Yuqi (White Deer Plain), Lost in the Pacific is a 3D Sci-Fi action adventure film helmed by Chinese director Vincent Zhou (Last Flight). The story sets in 2020 when a group of international elite passengers embark on an inaugural luxury and transoceanic flight that later gets into a seemingly unexplainable catastrophe.

Filmed at Malaysia’s Pinewood Studios in the spring of 2015, Lost in the Pacific is now finishing its visual effects by UFO Internationals. The film’s sound editing is supervised by Oscar-nominated Kami Asgar and Sean McCormack. Oscar-winner Mark Paterson (Les Miserables) did the final sound mixing for the film.

During filming, Lost in the Pacific’s international cast and its universal theme attracted industry attention across the global film market. Arclight Films, which is handling all rights outside China started the first round of sales in May during the Cannes Film Market when the film was still in production. Since then, the film has secured a number of deals, including Ram Indo in Vietnam, Viswaas in India, Aqua Pinema in Turkey, Pioneer in Philippines and Pt Prima in Indonesia. Arclight Films continues to make progress with international sales and will be presenting the film to buyers with never before seen footage at the 2015 Toronto International Film Festival (TIFF).

Arclight Films will be showcasing the film further at the American Film Market in November.