Lighting a Race through a Forest 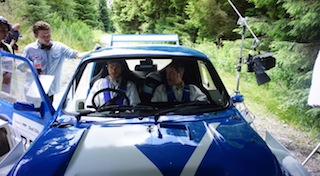 For his graduation film, cinematography student Sverre Sørdal, who is training at the National Film and Television School in Beaconsfield, U.K., did not take the easy road. Instead, he shot a film about rally racing on a track in the middle of the forest with a very tight shooting schedule and very unpredictable lighting.

Directed by Nick Rowland, Group B is named for the rallying era of the 1980s. The narrative follows Shane, who is returning to the track after a major accident, and explores his fears of getting back into racing while trying to find trust in his newly assigned navigator. Rowland and Sørdal previously collaborated on Slap, which received the Virgin Atlantic Little Red Award for Best Short Film at the Edinburgh International Film Festival in June.

Principal photography on Group B was five days on a rally track in the Welsh forest, with an additional day of shooting at Beaconsfield Studios. The production crew rented two daylight (5600K) balanced Zylight F8 LED Fresnels from Greenkit, a London-based film lighting rental company. “They are a great lamp to have in my rental stock, as they look great, perform really well and are very portable,” said Pat McEnallay, founder.

The forest location provided plenty of shooting challenges. “Trying to keep consistency was my main worry,” Sørdal recalled. “Our crew and budget were very limited. We split up scenes across multiple days, so we had to move quickly and try to be ready when the sun was. We had a little 6K generator for emergencies, but we did not use it much because we had the Zylights powered with batteries.”

Originally, the plan was to shoot on 35mm film, but the creative team eventually settled on the Arri Alexa for most of the shoot. “Luckily, we were helped by Tiffen getting some Black Satin filters that helped us achieve something a bit different,” Sørdal said. Most moving in-car footage was shot with an Iconix HD-RH1 mini-HD camera and Red Epic, with some aerial footage captured with the Blackmagic Cinema Camera.

“At times when the light was changing at the end of the shooting days, I always brought out the Zylights to keep the consistency and to give some definition,” said Sørdal. “I also found the quality of light to be very good. Mixing it with daylight worked very well.”

Sørdal appreciated the convenience of the battery-powered F8s when compared to lights that needed to be connected to the generator, which would then have to be positioned far away so it would not interfere with audio for the scene. “We used the F8s handheld on some moving shots – and not having to worry about cabling was very convenient,” he added. “They were light enough to hand-hold over a long period of time, but still had enough weight so you felt you had control, which actually is quite important.”

For one complicated shot, Sørdal wanted to have Shane reflected in the wing mirror as the dust engulfed the image. “We had very little space and time to get the shot, as the light was going quickly,” he said. “While I was trying to figure out how to get the right exposure, our lead gaffer had placed two Zylights just out of shot. There was no real space on the right side of the car where the light had to be placed, but with the very slim profile of the F8s, he managed to get away with it. We had no generator ready on this location, so without them, I’m not sure how we would have managed to get the shot.”

The F8s were also a blessing during a night shot while sitting in the back of a van with a Steadicam. “At one point, we had to get out of the car and follow our lead actor further. My spark was sitting in the van with one of the Zylights rigged with handles to give some ambient light, so we could see him running through the forest road,” Sørdal said. “There was no way we could have achieved the same result without a light rigged on batteries.”

Group B is scheduled to premiere at the British Film Institute in February 2015, and Rowland and Sørdal plan to submit the film to festivals later in the year. “For this project, the F8s were absolutely perfect,” Sørdal noted. ”I will always try to keep a few Zylights up my sleeve because they proved to be excellent.”