Let Me Out to Have Back-to-Back Korea and U.S. Release, an Indie First 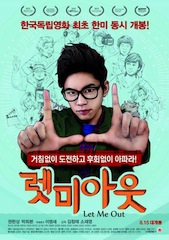 Group 1200 Media, in conjunction with Giant Ape Media, announced today a partnership with Tugg to release live-action Korean zombie coming of age melodrama, Let Me Out theatrically in three U.S. cities simultaneously for one night only on Wednesday, September 25th at 7:30pm. Let Me Out is the first Korean independent film released back-to-back in both Korea and the U.S. and is distributed in the U.S. by Funimation Entertainment, a Group 1200 Media company, based in Flower Mound, Texas.

The film will be released theatrically in San Francisco and San Diego, California and Dallas, Texas in select theaters. Advance ticket sales are available through Tugg, a grassroots movie distribution business model. Directed by Chang Lae Kim and Jae Soh, the film stars popular K-drama actor, Hyun-Sang Kwon (The King 2 Hearts and Queen of Ambition) and K-pop star, Hee-von Park from SM Entertainment's girl band Milk and star of (Grand Prix, Read My Lips, Family and God's Quiz Season 3). Let Me Out is Kwon's first lead role in a motion picture and he is the son of acclaimed Korean director Kwon-Taek Im (director of Chihwaseon and winner of Best Director at the 2002 Cannes Film Festival).

Tugg is a web-platform that enables individuals and organizations to host special movie events and choose the films that play in their local theaters. Individuals are empowered to select a film, screening time, and nearby theater, and then spread the word to their immediate and online community. Once a necessary amount of people commit to attending, the event will be confirmed, and Tugg will reserve the theatre, manage ticketing and ensure delivery of the film; allowing the audience to sit back and enjoy the show.

"Coming off the success of a sold out screening and celebrity red carpet U.S. premiere in Los Angeles, we learned Funimation fans want to be involved in helping us plan our events. They demanded we bring Let Me Out to additional markets across the country," says Adam Zehner, vice presdient of distribution, Funimation Entertainment. "Through Tugg, a wide variety of films can be shared within local communities and promoted online. We've been waiting for the right film to partner with them on and feel this is the perfect vehicle to help launch Let Me Out here in the U.S."

"The demand for Let Me Out in other markets across the country has been heard, Group 1200 Media listens to fans of Funimation and Giant Ape Media. We believe we need to bring Let Me Out to fans of independent film, everywhere. By using Tugg, we are giving filmgoers the opportunity to demand the film for their own town. They become the brand champion for the film to help spread the word online," says Scott Lonski, director of marketing services, Group 1200.

"Word of mouth about K-drama star, Kwon Hyun-Sang's feature film debut and breakout performance in this film is building online. Tugg gives audiences everywhere the opportunity to use social media to organize screenings in their hometowns and spread the word to friends and online communities using Facebook and Twitter. If you like Asian cinema and Korean dramas or if you're a fan of indie and art house films, this film is for you," says Irene Cho, producer, Let Me Out.

Funimation & Giant Ape Media are partnering with DramaFever again on these Let Me Out screenings to help spread the word and are planning contests for free screening tickets and unique film experiences similar to the one in L.A. where Giant Ape hosted a contest with an opportunity to attend a dinner with the film's director, lead actor and VIP tickets to the premiere.

Let Me Out is a Korean language coming of age melodrama and pays homage to Day For Night (France), Living In Oblivion (USA) and Korean cinema. Let Me Out pokes fun at director Yang Ik-June who won the 2009 Rotterdam Film Festival's Tiger Award for his film, Breathless.  Director of M, Duelist, Nowhere To Hide and Korean film icon, Lee Myungse is cast as himself.

This zombie melodrama is Mu-Young's film school opus. An eternal senior, he knows everything about cinema but nothing about actual filmmaking.  Critical of everyone else, he heckles the famous indie director Ik-June Yang at a campus screening and somehow receives film funding.  His dream of working with his love-interest Ah-Young becomes a nightmare.  Everything that can go wrong does.  Barely surviving a disastrous shoot, Mu-Young learns that making a movie is like making love: you can't do it alone. Let Me Out is a tribute to guerrilla, indie, and amateur, low-budget cineastes struggling to create.  It is about hope.

Let Me Out opened in Korea on August 15 and is being distributed through Baekdu Daegan Film Company in approximately 15 theaters including Art House Momo (Baekdu's Art House theaters), CGV Movie Collage (the Art House division of CJ Entertainment), and Artplus Cinema Network in various cities throughout Korea, including Seoul. The film had its red carpet U.S. premiere at the Downtown Independent Theater in L.A. on August 16 to a sold out audience with director, Jae Soh and Kwon Hyun-Sang, the film's lead actor who attended from Korea.

For additional information about buying advance tickets to a screening of Let Me Out, or being an organizer in San Francisco, San Diego or Dallas, please go to tugg.com and search by film for more details.