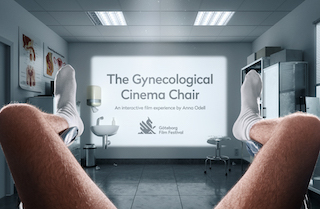 The organizers of the upcoming Göteborg Film Festival have posed a question: Do you have what it takes to put yourself in a woman’s position? In a unique interactive film experience created by celebrated artist and filmmaker Anna Odell, powerful men such as hockey legend Börje Salming, a former president of Interpol and a Swedish former minister of justice are offered the chance to undergo gynecological exams as a way of showing their vulnerability. Welcome to The Gynecological Cinema Chair at Göteborg Film Festival.

The whole experience is interactive, open for anyone with a ticket, and during the screening you yourself will have to make a bold choice if you want to see the whole story fold out.

Odell is one of Sweden’s most famous and influential artists. Her film The Reunion was presented at the Venice Film Festival and won the FIPRESCI award for best debut in the side sections Orrizonte and Critics’ Week. She also incited extensive debate in Sweden after faking and filming a suicide attempt as part of her film Okänd, kvinna 2009-349701.

At Göteborg Film Festival 2020 she will for the first time show her work Undersökningen (The Examination), specially made for the festival. In the film, the artist explores the gynecologist’s chair as a metaphor for vulnerability.

“You get up in the chair voluntarily, but I dare say that no one feels comfortable in it. It is also a chair that is used exclusively for examining women, which perhaps makes it even more suitable for the project,” says Odell. “On the other hand, I think the position is quite familiar to many men. They often sit with their legs spread widely, taking up a lot of space. The position in a gynecological chair is basically the same, you just tilt it backwards.”

The participating men featured in the film are: