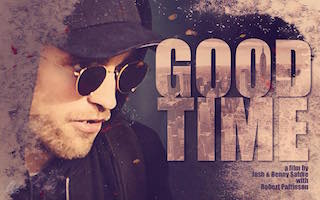 The film, which screened at the Cannes Film Festival and has attracted wide critical acclaim, stars Robert Pattinson as Connie Nikas, a thief who robs a bank in Queens as part of an ill-conceived scheme to get his mentally handicapped brother Nick (Benny Safdie) out of jail.

Sound plays a critical role both in setting the scene and creating the film’s tense atmosphere. "Good Time is avery intimate, gritty film,” said Price. “The sound needed to have a lot of texture. It needed to make you feel that you were in New York, in a car with the actors and being chased by the police.”

Mangiamele added that while the Foley needed to be realistic and blend with the production sound, it also had to have a musical quality to integrate seamlessly with composer Daniel Lopatin’s score, which is featured prominently. “Benny and Josh were really psyched about the score and wanted it to drive the soundtrack,” he said. “Sound effects are woven in with the music and dialogue in an interesting way.”

Having collaborated previously with Alchemy, Price felt confident that they could deliver Foley effects that met the creative need, and do it efficiently. “The turnaround was tight,” he said. “When the film got into Cannes, we had to move at a fast pace so, for me, it was important to work with people whom I knew were dependable. Alchemy is my go-to facility. They do a great job and I trust their crew.”

One memorable use of sound occurs early in the film. Connie and his accomplices are fleeing a bank after a hold up when a dye pack hidden among their loot explodes and releases an aerosol jet of red dye. Alchemy’s crew added to the frenzy with a dense mix of sound elements. “We took compressed air and gently worked it in as the bag of cash opens,” said Fang. “Then, as it explodes, we went crazy. You hear money and plastic flying everywhere. The air sprays viscously as the characters are doused with dye.”

The film’s setting in a rundown section of Queens and cast of low-life characters had a big impact on Alchemy’s approach to Foley. They went to considerable lengths to replicate the environments pictured on screen and mimic the characters’ personalities through their body movements. “The characters in this movie don’t have a lot going for them and the actors do a wonderful job in bringing that out,” said Bloome. “We wanted to support that in their footsteps.”

Similarly, the film has a very distinct visual style. Cinematographer Sean Price Williams shot much of the film in tight close-ups with a hand-held camera. That lends the action a sense of immediacy and realism that the Foley team sought to match. “Scenes like these are very challenging to capture on the Foley stage,” said Bloome. “You want to get the sync right—that’s important—but you also want to capture the actors’ performances, and you’ve got two guys running down a street with stolen cash and you only see them from the chest up.”

The Foley team had the most fun with a scene where a fleeing robber runs into a large window and is captured by police. It includes shattering glass, snapping handcuffs and crunching bootsteps as the perp is led away.  Bloome and Fang created the initial crash by smashing a brick through a giant piece of a plate glass. “We have a very large, dedicated glass pit that we smash stuff in,” said Bloome. “It allows us to do massive effects that at other places might be impossible or would decommission a room for hours.”

Although most of the sound effects in the film are realistic, the shattered glass is purposefully over the top. “Part of our job is to help preserve the first-time viewing experience of the audience,” said Fang. “We wanted the crash to be just as impactful and out of nowhere for people in the theater as it is for the characters. It’s sudden, it’s painful and it’s loud.”

Although the project had a tight deadline, Fang said that Alchemy is used to pressure, having worked on many independent films with festival commitments. She added that the Foley work was split between two crews so that they could meet the deadline without shortchanging creativity or production value. “For us, it’s all about the story and making the characters feel real and alive,” Fang said. “We are really good at making use of the budget and doing a great job in a limited period of time.”