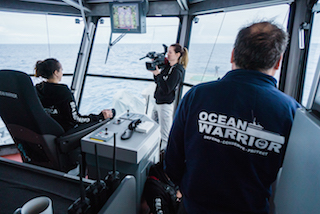 As production of the next round of high-profile documentary shooting for the Sea Shepherd organization approached, Gavin Garrison, principal of Red Apple Production, Santa Barbara, California, made the decision to shoot the upcoming project for the first time in 4K. He chose Panasonic’s AG-DVX200 4K large-sensor camcorders for the project.

Sea Shepherd has been the focus of Animal Planet’s Emmy-nominated series, Whale Wars. The series premiered in 2008 and has highlighted both the controversial whaling trade and the tactics that Sea Shepherd and its staff and volunteers use to attempt to cripple it and stop whaling in the Southern Ocean off the coast of Antarctica. Garrison joined the Red Apple filming team on Whale Wars in 2012.

Established in 1977, Sea Shepherd’s mission is to end the destruction of habitat and slaughter of wildlife in the world's oceans in order to conserve and protect ecosystems and species. They use innovative direct-action tactics to investigate, document and take action when necessary to expose and confront illegal activities on the high seas.

Garrison and his Red Apple Production partner Ashleigh Allam recount shooting conditions with Sea Shepherd this year: 100 days at sea; shooting from helicopters, small boats, and from the bridges of the organization’s ships; shooting in pitch-black conditions; and routinely having camera operators and cameras drenched in sea water. 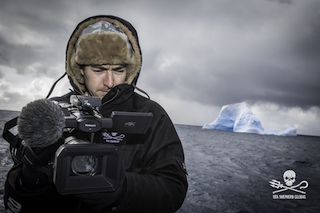 “As a producer and cinematographer, my goal is to try to pioneer a look that keeps us relevant and engaging in today’s television market,” Garrison said. “I am eager to introduce some of the modern production technologies that have become commonplace on other productions – most notably, 4K and drones.”

Red Apple’s nine-person crew joined ships in Melbourne and Tasmania in early December and sailed with Sea Shepherd to Antarctica, venturing almost twenty-five thousand miles, the equivalent of one trip around the world. The shoot continued through mid-March of this year.

Garrison said his crew hand carries all its gear. “We were able to eliminate a whole set of cameras because of the DVX200’s IR capability: ultimately we shot up to 30 percenr of our footage in pitch black conditions, so we needed cameras on board that could handle night shoots.”

“The camcorder’s Auto Focus system turned out to be an essential asset, as we were able to go ‘Full Auto’ as needed, especially when shooting one-handed from helicopters and on the patrol boats,” he continued. “Also, with the ability to sync time code, we were able effortlessly sync the DVX200s with our action cameras, effectively creating a multi-cam studio on the bridges of our ships.”

“The DVX200 was the perfect solution for our demanding and unpredictable marine-based documentary work,” Garrison said. “The DVX200 played an essential role in capturing this season in Antarctica and exceeded our expectations at every turn.”

All episodes of Whale Wars are available on the Animal Planet GO app which allows viewers to stream full episodes of the series on any platform.