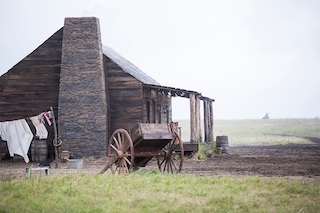 Oklahoma has a rich history of filmmaking. The state is a prime location for filming due to its diverse landscape and history, along with the people who call the state home. With 39 different federally recognized tribes – each with its culture and customs – residing within the state, many stories can be told about their unique histories. Telling its story from its own perspective is important to the Chickasaw Nation.

“One of the best ways we can educate people about who we are – about our involvement in the early days of our country’s history, as well as who we are today – is to share a story in such a way that it both informs and entertains,” said Chickasaw Nation secretary of communications and community development, Robyn Elliott.

To date, three feature films have been produced by the Chickasaw Nation. These include Pearl, Te Ata and Montford: The Chickasaw Rancher. Both Montford: The Chickasaw Rancher and Te Ata were made available for streaming this month on Netflix. Each film illustrates how Chickasaw culture played an important role in the lives of the individuals and events portrayed in the films, and how those individuals and events influenced the world around them.

“Casting local can be great,” said Chickasaw Nation interim video production director Phillip Sullivan. “You get to support that local community by casting one of their own, and they get to represent for their town or state. Having someone be from where your story in the film takes place adds authenticity. It’s also a bonus to have cast from Oklahoma that aren’t fazed by Oklahoma weather or anything else this great state can throw at you.”

To help fill the many roles and keep up with the demand for extras in Montford: The Chickasaw Rancher, Chickasaw Nation Productions turned to the services of The Actor Factory, based in Norman, Oklahoma.

All three of Chickasaw Nation Productions’ feature films were almost exclusively filmed on location within Oklahoma.

“For Montford: The Chickasaw Rancher [filming locally] was perfect,” said Chickasaw Nation Productions supervising producer Angela Owen. “Because we had access to the Chickasaw Ranch and so many acres there, we were able to move to different spots on the ranch and get a lot of different looks or sets in that one location.”