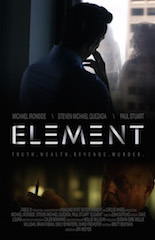 Element follows the downward spiral of a financial advisor who is shot and his wife killed after an evening on the town. Unable to remember details of both the evening and much of his past, he turns to deep trance hypnosis in hopes of finding answers. Driven to seek revenge on his wife’s murderer and struggling to retain his high-pressure job, he uncovers dark secrets in the trance world that will either save him or kill him.

“Element was a labor of love six years in the making. From finding a script that spoke to us to countless revisions and unexpected challenges during principal photography, it is thrilling to see our vision come to life on the screen,” said Susana Gibb, Element producer and Dallas-based Table 31 Productions co-founder. “We really could not have brought the project to fruition without the people at the Oklahoma Film + Music Office: they are an amazing asset.”

Element was filmed in various locations throughout Oklahoma City and utilized the Oklahoma Film Enhancement Rebate Program administered by OF+MO.

“With over 36 states offering film incentives, Los Angeles and New York are no longer the epicenters of film production they once were,” said OF+MO director Tava Sofsky. “Filmmakers have many destinations from which they can choose to base their production, and we are happy our Dallas-based neighbors from the South chose Oklahoma’s competitive program. We are excited for the production team of Element, and look forward to seeing what success they find with the film in the New Year.”