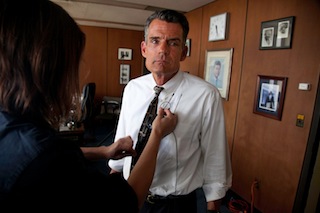 In early 2013, director Mark Hayes read a story about a Los Angeles Superior Court Judge, Craig Mitchell, who started the Midnight Mission running club consisting of former substance abusers, ex-convicts, homeless people and others who fell on hard times — either by making the wrong choices at earlier points in their lives, or by simple misfortune. Immediately sensing the emotional gravity and compelling human dimension of the story, Hayes and his partner, producer Gabriele Hayes, requested a meeting with judge and began the journey towards creating their feature documentary, Skid Row Marathon.

From their earliest conversations in the judge's chambers to the finish line of the Accra International Marathon in Ghana, Africa last year, Sennheiser microphones were there to capture every last detail of the journey — including all the challenges, struggles, dreams and successes each of the runners experienced. The struggles were almost overbearing — but the successes were overwhelming. After completing the International marathon in Ghana, some of the runners went on to complete the 29th Los Angeles Marathon last March, while others are now training to compete in the Marathon of Rome this spring.

Among the characters in the film are Ben Shirley, a former heavy metal musician whose career was destroyed by drug and alcohol addiction; Rafael Cabrera, who was sentenced to life in prison after shooting a rival gang member; and Brian Langston, whose family lived out of a car after his father became ill with diabetes and was no longer able to work. Each of these club members have their own heart wrenching stories of how they fell on hard times, yet were able to pick themselves up by overcoming the immense physical and emotional challenge of a marathon. 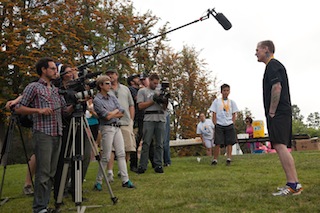 "The sweet spot of this story is the judge, who is also a big runner," says Hayes. "Here is a guy whose job it is to rule on legal matters and hands out sentences to people, mostly involving prison terms. But when he is not working, he is helping people who fell into hard times get a fresh outlook on life by training for and running marathons."

The Midnight Mission running club — named after the century-old human services organization — began after a defendant finished his prison term, came back to visit the judge and subsequently invited him to Skid Row to meet some of his friends. "He went down and spoke to a few of them, and realized that starting this running club was something positive he could do," Hayes says.

At the earliest stages of the production, the filmmakers both knew that the audio production would play a key role in the storytelling; and based on the unpredictable nature of the content and dialog, there would often be no second chance to get it right. They contacted Christopher Currier of Sennheiser, who was eager to help and recommended a microphone package consisting of the MKH 416 shotgun microphone, HD 25-II headphones for monitoring and EW 112-PG3 G3 wireless systems.  “Mark and Gabriele were already very familiar with our gear and had been using the older MKH 415 for their past work. Adding the MKH 416 and a few other tools just rounded out their equipment list for this amazing project,” Currier says. 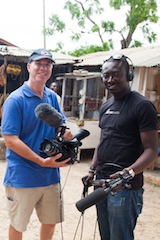 Once the project began, the Hayes were told by the judge that they would have to run with the club. "Thankfully Gabi is a runner, so she would run alongside them with a camera and an MKH 415 microphone mounted on top to capture all the action," Mark Hayes says. Twice a week, the group would complete a seven-mile run and then gather on a street corner to check on how everyone was progressing — both with the running and in their personal lives. "To capture these important conversations, Gabi would have an MKH 415 on a boom pole connected wirelessly, and I would be shooting with a camera with an MKH 416 on a shoe mount," he explains.

One of the most important audio segments the team captured was an early interview with the judge in his chambers at the Superior Court of Los Angeles, during which he explained why he started the club. "Once again, we used the boom pole with the MKH 416, and also a lavalier microphone (the MKE2-EW Gold) on the Judge's collar, connected to a G3 wireless transmitter," Hayes recalls. "After we finished the shoot, we took the audio back for editing and it just sounded fantastic. When the audio is perfect, it can make up for a shaky camera or other visual imperfections that may occur."

After the marathon training phase was completed, the running club and production crew flew to Ghana, West Africa, where the environmental conditions became harsh and challenging. "When we got there, it was like 100 degrees and very dusty," he recalls. "A lot of the roads were not paved, and we were right by the ocean. It was probably the worst situation for equipment you can imagine."

The filmmakers began to notice rusting and wear on the camera equipment. "I was really worried because we were under the most extreme circumstances of heat, dust, humidity and salty air,” Hayes says. “Despite all this, the audio performed flawlessly, and the Sennheiser gear we had was no worse for the wear."