Doc Asks: Are We Alone? 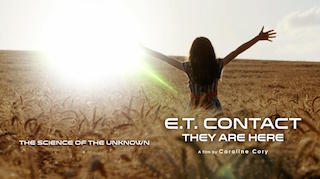 Are we alone in the universe is a question that human beings have pondered likely since the dawn of time. The new documentary film ET Contact: They Are Here documents the jaw-dropping stories of individuals from around the world who share similar accounts of extraterrestrial otherworldly encounters. Written, directed and produced by Caroline Cory, the film takes viewers on an extraordinary journey to uncover whether these seemingly independent yet parallel reports may actually be scientific evidence of a greater phenomenon at work.

Cory’s own personal experiences with the supernatural at a very young age provided the inspiration in the making of the film. “These experiences opened me up and kept me interested in all paranormal phenomena,” said Cory. “More importantly, how the unseen worlds really work and the quest for true science behind these events.”

AlphaDogs audio engineer Curtis Fritsch was in charge of sound design for the film. Cory provided Fritsch with a list of special effects prior to beginning work in post, saving valuable time and money. Even though the subject of the documentary is about aliens, it was imperative that it wasn’t designed to sound like “ 50’s flying saucer sounds.”

Fritsch worked one-on-one with Cory in creating textured and psychoacoustic sounds for both the aliens and space ships. In addition, interesting sounds were also created by using EQ and reverb, giving an ominous vibe to the whooshing sounds of the alien space ships upon landing and taking off. Authentic NASA recordings of the Apollo 14 mission were also used. 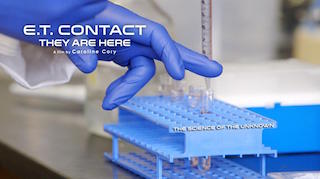 Fritsch said, “I was able to work backwards and find the audio where Edgar Mitchell tells Houston he’s on the moon. I then synched that audio to the NASA footage, which I felt added some additional authenticity to the film, which ended up being one of my favorite sounds. When given the opportunity I’d much rather go the extra mile for authenticity, rather than just throw in something that’s mediocre.”

Terence Curren, veteran colorist and founder of AlphaDogs Post Production created the look and feel of the film in Avid Symphony. Due to the various archival sources, great care was taken to seamlessly match the diverse elements. Bringing standard definition footage from various frame rates into the high definition world, presents one set of challenges. Getting the color to match the various themes throughout the film is another. Fortunately the team at Alpha Dogs has many years of experience handling these kinds of issues.

“It was important that the film have an authentic look and feel to it, rather than coming off as another cheesy alien story. The stories are very personal and real. It was my job as colorist to ensure that a credible vibe came through in the storytelling by applying specific choices in color and tone,” said Curren.

Cory hopes after audiences watch the film they will walk away with an understanding that there is a real science behind what appears to be unexplainable or paranormal. That the universe exists in a fraction of what it really is and what it has to offer.

ET Contact: They Are Here has already won six film festival awards, two official selections and is up for several others through 2018. A DVD of the film is available now and it can be streamed online.