Crafting the Sounds of Southpaw

The film traces the rise, fall and redemptive resurrection of Billy Hope (Jake Gyllenhaal), a talented but troubled fighter who grew up an orphan in New York’s Hell’s Kitchen. A boxer himself since his youth in Pittsburgh, Fuqua delivers fight sequences that are both brutal and thrilling. He places the audience directly inside the ring—and sometimes inside Hope’s head—allowing them to experience the action from the perspective of the fighters themselves.

In an effort that began even before picture production, the sound crew spent months educating themselves about the fight game; recording elements in gyms, boxing rings and arenas; and blending them with music and dialogue. The results are boxing sequences that look, sound and feel gut wrenching, and are among the most compelling in recent cinema.

“Mandell, David, Daniel and Steve are skilled artists who sculpt sound in ways that enrich the story,” says Fuqua. “For Southpaw, they immersed themselves in the fight world and learned the intricacies of its sounds. That allowed them to avoid clichés and bring the boxing scenes to a life in ways that are real and memorable.”

“Having mixed most of Antoine’s films since Training Day, Dan and I have a good sense of his goals for the soundtrack: keep it real and dynamic,” observes Pederson. “We look to sound design to delve into emotional needs. The entire sound team works to serve this purpose.”

“Our challenge,” adds Leahy, “was to make you feel what the fighters feel.” 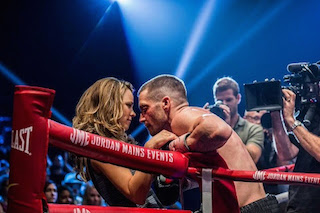 While the film was still in pre-production, Winter, Esparza and a small crew traveled to Las Vegas to capture crowd sounds at a live prize fight. They positioned a 5.1 microphone above the press box to record surround ambience, while recordists sat in different sections of the arena to capturing individual perspectives. “When we brought the recorded elements back to the lot, we lined them up and panned them around the mix stage to create a full spatial environment,” recalls Esparza. “We also captured bell rings, ten second warning clappers and referees’ whistles. We ultimately used all that stuff.”

“We also made recordings back stage, in the locker rooms, of fighters coming up the stairs, in the lobby,” adds Winter. “One guy went up into the balcony to get individual people shouting at the boxers.”

Crowd noises were crucial to the fight scenes. “We have the crowd react to different punches, to the ebb and flow of the fight,” says Esparza. “Sometimes they bend toward one fighter, sometime toward the other. They are quick to turn! The crowd is always a player; it’s never just wallpaper.”

Winter notes that while they were inspired by classic boxing films like Raging Bull and Rocky they did not look to them for reference. “We watched a lot of real fights…not movies,” he recalls. We didn’t want to lean on what had been done previously. Antoine was interested in realism and our job was to take the visuals that he shot and elevate them through sound.”

Punches and other sounds from inside the ring were recorded at Los Angeles-area gyms. Here again, the object was to replicate the actual experience of a boxing match, rather than Hollywood drama. “A lot of movie punches have heavy mid-range and a lot of drive,” observes Esparza. “We opted to go more realistic with more of a leather snap to the punches. We did the same thing with the boxers’ vocal utterances. Boxers work to conserve energy, so the sounds they make tend to be very breathy. It’s not like the efforts you might hear in Rocky.”

Winter and Esparza chose to record footsteps in gyms rather than on a Foley stage to better capture the true sound. Boxing rings are covered in mats and have suspension systems so footfalls tend to be muted. “It’s almost as if the whole ring creates the sound of the footsteps on the large movements,” Winter notes. “It’s that compression of air creating the sound.”

The sound design deviates from strict realism when the camera moves inside Hope’s head. In those instances, the sound takes on an abstract quality to simulate the boxer’s point of view. “We used contact mics on our faces to create the sound of internal breathing,” recalls Esparza. “And the punches are really big. If a hook is coming from the side, we placed the impact on the right side of the theater so it becomes much more sudden and visceral.”

Southpaw was mixed in Sony Pictures’ Cary Grant Theater with follow-up updates performed in the William Holden Theater. Pederson and Leahy primarily relied on a ProTools system, augmented by a variety of plug-ins, with the music mixed on a Harrison MPC console.

“The fun and challenge in Antoine’s films are sonically addressing the intersection of outward action and personal introspection,” states Pederson. “Busy action sequences frequently dive into the psyche of the character doing the action. Sound can be very effective in shifting perspective and steering the audience to where Antoine wants their focus.”

Leahy notes that screen focus moves rapidly between the ring and the arena. The precision of the sound helps the audience to follow the action and retain their sense of place. “For close-ups, where they are really duking it out, we focused on the hits, the flooring, the ropes,” says Leahy. “We go from up in the audience to down with the fighters, feeling their every move. You are right there with them.”

Bringing the audience along is especially tricky when the focus changes to Hope’s internal perspective. “We use the sound of punches hitting POV shots (as the audience) with a different internal quality, in addition to dramatic panning movement that's very disorientating," explains Pederson. “That is coupled with immersive breathing that is spread around the theater to give the audience the experience of being boxed.”

The cumulative effect, says Esparza, is to make the audience forget they are watching a movie. “Antoine keeps you at the edge of your seat for the entire duration of the fights,” he says. “He maintains a delicate balance, weaving between elements and keeping you guessing about the outcome.”

“It’s like a real boxing match,” says Winter. “At any moment, either fighter could win.”