Crafting the Sounds of Battle 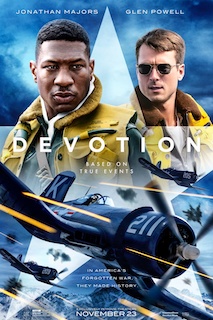 Devotion, the new film from Black Label Media, distributed by Columbia Pictures, and based on Adam Makos bestselling book of the same name, tells the inspirational, true story of two elite US Navy pilots who helped turn the tide in the most brutal battle of the Korean War. Through their heroic sacrifices and enduring friendship, Jesse Brown, the first Black aviator in US Navy history, and fellow fighter pilot, Tom Hudner, became the Navy’s most celebrated wingmen. Directed by JD Dillard and written by Jake Crane and Jonathan A. H. Stewart, the film stars Jonathan Majors, Glen Powell, Christina Jackson, Joe Jonas, and Thomas Sadoski.

The film’s sound team was tasked with crafting the story’s epic sonic environment, including its thrilling depictions of aerial combat. In a groundbreaking effort, the crew added to the film’s uncanny realism through their meticulous recreations of the sounds of ferocious battles, ships at sea and thunderous aircraft, the latter constructed from field recordings of a vintage Corsair fighter identical to those appearing in the film.

“The creative brief from JD Dillard was to strive for historical accuracy and authenticity,” says supervising sound editor Will Files. “When you’re on an aircraft carrier, you need to feel the wind on the deck and the rush of water. The sounds of the ships, the planes, communications systems, and other military details had to be period correct. Our role was to recreate the experience of pilots in the Korean War from a sound perspective and place the audience in the middle of the action.”

Supervising sound editor Matt Yocum and sound recordist Kai Paquin traveled to Erickson Aircraft Collection, a museum in Oregon, to record one of few remaining F4U Corsair fighter planes. Using microphones strategically placed in the plane’s cockpit and on its exterior, Yocum and Paquin captured the sounds of the plane as a veteran pilot took it through maneuvers like those seen in the film. They also recorded flybys of the planes from the ground.

“After the plane landed, we recorded the sound of its 2,000-horsepower engine,” recalls Yocum. “It produces huge, warping metal sounds and clicks and pops as the metal cools. Later, the air crew conducted simulated movements on the ground, throttling the plane and pulling it back. That allowed us to safely move around the plane, recording it from different angles in a way we couldn’t in the air.” 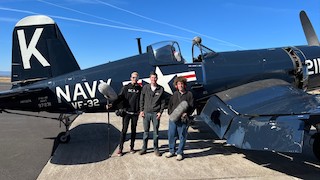 Radio communications was also captured in a true-to-life manner by recording the voices of pilots through actual headsets used in the war. The field recordings were employed not only to bring the aircraft to life, but also to complement the story’s narrative and its powerful emotions. “Sound was used in a very specific way,” explains Files. “Matt assembled sound effects like an impressionistic painting. It’s authentic to what you are seeing, and it’s also rooted in what we want you to feel.”

Similar care was applied to the film’s dialogue. Editors worked hard to deliver crystal clear dialogue from tracks recorded under extremely challenging conditions such as aboard bustling ships, in noisy cockpits and amid intense battles. “Our goal was to use as much of the production tracks as possible,” notes supervising automatic dialogue replacement and dialogue editor Eliza Zebert.  “When it was too noisy, we supplemented the original dialogue with ADR. The mixers, Joel Dougherty and Brandon Proctor, did a great job in matching the location and ADR recordings and blending them with the sounds of the plane and the music.”

Other ADR elements were used to add background color. “JD Dillard wanted scenes with the crew to have a lot of texture, so we added ad libs when people were entering a room, sitting in a classroom or walking across a deck to their planes. We built those backgrounds on the ADR stage and made them better in the mix by manipulating lines, moving things around and changing things up so that it sounded full and natural.”

Action scenes were further filled out with background crowd voices. The sound team brought in military experts to instruct voice actors in terminology and slang used by service members. Native French speakers supplied background vocals for a sequence set in Cannes, while Chinese speakers lent their voices to Korean battlefields. 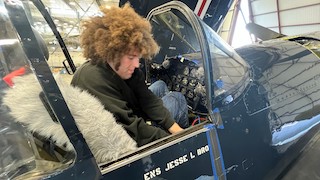 Devotion is not all action. It also tells the poignant love story of Jesse and his wife Daisy. “There are quiet moments that required a subtle, nuanced approach to sound,” says Zebert. “Just before Jesse leaves for military duty, he has a heart-to-heart talk with Daisy as they walk on a beach. It’s just them and a few waves. Near the end of the film is a scene at the crash site of Jesse’s plane. We hear Tom’s footsteps as he rushes toward the plane, then a few breaths. We spent hours on that moment. They were small sounds but filled with emotion.”

The sound elements used in both action sequences and quieter moments were both designed to draw the audience into the story. “We built an immersive world of sound that makes you feel as though you are experiencing the story through the eyes of Jesse and Tom,” says Yocum. “We wanted to put people into their shoes.”

Final mixing was completed at Sony Pictures in the studio’s 344-seat Cary Grant Theater in Dolby Atmos. Proctor and Dougherty were tasked with blending the dialogue, sound design and ADR elements prepared by the post-production sound team with Chanda Dancy’s soaring, emotionally uplifting score, which was recorded in Nashville with a 109-piece orchestra. “Brandon and Joel did a masterful job in taking that whole ball of wax and molding it into an artistic and cohesive whole that helped drive the story,” says Yocum.

“The combat sequences were especially challenging for the mix team,” he adds. “First there was the dialogue where every word had to be distinct, then we had flack and bullets flying by, explosions, the rattling of the planes, the whipping of the wind and Chanda’s beautiful score. All those elements had to work together seamlessly and be heard simultaneously.”

According to Files, the authenticity of the sound helps to make the audience believe that what they are seeing is true. “They connect with the material on a deep, emotional level,” he says. “The sound in this film doesn’t feel polished in a conventional Hollywood way. It’s visceral and real and it leads the audience to connect with the characters. We did not make it too shiny, too obviously beautiful. The beauty is in the imperfections. Especially in the electro-mechanical world of the ‘50s where not everything is perfect. We leaned into that feeling.”