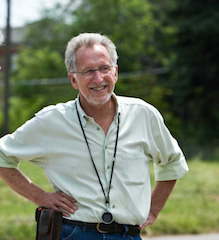 Academy Award nominee and American Sniper cinematographer Tom Stern will appear in a conversation at the National Association of Broadcasters Show in Las Vegas in April. The session, Heroes, Legends and American Sniper: A Conversation With Tom Stern is the Keynote Presentation of the Creative Master Series and is produced in partnership with the International Cinematographers Guild Local 600.

The conversation is scheduled for Tuesday, April 14, 1:45 – 2:45 p.m. The one-on-one conversation will explore Stern’s career and his close association with Clint Eastwood, which has yielded such critically acclaimed hits as Mystic River, Million Dollar Baby and Flags of Our Fathers.

Attendees will learn about Stern’s history as a gaffer, his on-set creative process, his insights into working with crews worldwide, and his experiences using digital capture to visualize 2014’s highest grossing film, American Sniper.

Stern joins Creative Master Series participants Robert Yeoman, ASC, (Oscar nominee and cinematographer of The Grand Budapest Hotel); Sandra Adair (editor of and Oscar nominee for Boyhood); animators and VFX artists of the smash hit video game Destiny; and music and SFX craftspeople from various projects including Gone Girl and the Call of Duty franchise, who will appear as part of a session discussing music selection and production.

“Tom Stern is a consummate craftsman, one who has built an incredible body of work over the course of his career, from Flags of our Fathers to The Hunger Games," said Chris Brown, NAB executive vice president, Conventions and Business Operation. “His vast base of knowledge will be of enormous value to our attendees, and I join our partners at ICG in welcoming Stern to the lineup at the 2015 NAB Show.”

The three-day CMS program provides an insiders’ perspective from directors, show runners, creative crew, studio and network production executives as they share their insights on award-winning television and film projects, as well as commercials, gaming properties, and live event productions.