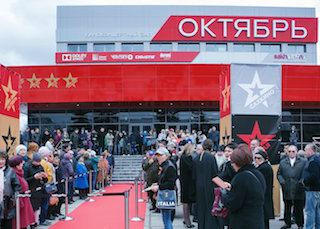 “We are proud to use Volfoni 3D system in our PLF screen and we are completely happy about the result,” said Yanshin Denis, CEO of Gauk Kinodosogovoe Obyedinenie.

“Volfoni solution was the only one which completely gives perfect brightness, very low level of ghosting in that complete installation,” said Arseniy Kuzminich, director of Asia Cinema.

Cinema Hall Oktyabr opened in 1967. Despite its age, it still holds the leadership position in the regional film industry and is considered as one of the favorite places for the people of the island of Sakhalin. Until 2011 Oktyabr was the largest one room cinema in Sakhalin, with seating for 814 and a 21 by 10 meter screen.