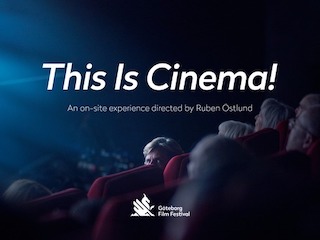 The shared experience of the cinema is unmatched. But has contemporary scrolling on individual screens hurt audiences’ ability to participate in a collective screening?  What happens when a director gets to direct his audience? During an exclusive screening of Triangle of Sadness at the Göteborg Film Festival, director Ruben Östlund will break the fourth wall and step into the movie theater; not only having directed the film showing on the screen, but also directing the audience in the cinema.

The event is called This Is Cinema! In it, Östlund, the two-time Palme d’Or winning director and the festival's Honorary President wants to get to the bottom of the behaviors of modern-day cinemagoers. At Göteborg Film Festival he will challenge the lazed audience of contemporary cinema to create the world’s best cinema culture.

He said, "There’s a unique aspect to the cinema: it’s where we watch together. Watching something together intensifies the experience and sets a higher standard for what’s shown on the screen. Compared to countries like France and the US, the Nordics have a more passive audience culture. Here we hide in our seats, taking less responsibility for the show. After screenings we go home without discussing what we’ve seen. That kind of visit to the movie theater is hardly even worth leaving the individual screen for. For cinematic culture to flourish and reach its full potential, the audience must understand the part they play.”

This Is Cinema! takes place at Cinema Draken at Göteborg Film Festival on January 28. On the same day, the festival will also be arranging several seminars on cinema as a vehicle of culture and social space. The future of cinematic culture will also be one of the topics during the festivals annual Film Policy Summit on January 27. 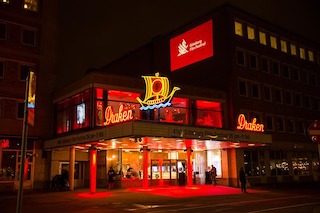 “At Göteborg Film Festival we not only want to show and talk about the most interesting films of the year,” said Jonas Holmberg, artistic director at Göteborg Film Festival. “By being a platform for experimental cinematic experiences, we also want to initiate a discussion around how we’re watching films in this period of medial transition. It feels very exciting that Ruben Östlund wants to challenge traditional ideas about the relationship between director, audience, and film. Presenting the show This Is Cinema! at Göteborg Film Festival makes me both proud and full of expectation.”

Östlund made his feature film debut in 2004 with The Guitar Mongoloid, and the success story that followed includes two Palme d’Ors and seven European Film Awards. His films have been nominated for both Oscars and Golden Globes, and in 2021 he was awarded with the Nordic Honorary Dragon Award at Göteborg Film Festival. Aside from Ingmar Bergman, Ruben Östlund is the most successful filmmaker in the history of Swedish cinema. Recently, Östlund was appointed as Honorary President of Göteborg Film Festival.

With Palme d’Or-winner Triangle of Sadness, Östlund shines a not so warm light on the fashion industry. The film follows two supermodels, who, following the disastrous end of their luxury cruise, find themselves stranded on a deserted island along with some of their fellow passengers. Far away from gaudy catwalks and multi-course dinners, social hierarchies are overthrown, and worldviews challenged.