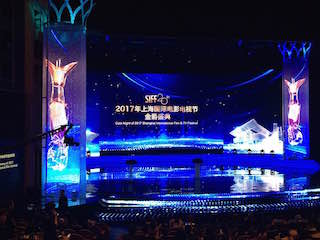 This year, the Christie CP2230 DLP digital cinema projector has been deployed to screen both films at this prestigious event, attended by numerous international and regional celebrities.

In addition, Christie has supplied a CP2215 DLP digital cinema projector for the adjudication of films nominated for the Golden Goblet Award for Best Film. A total of 14 films from around the world will be vying for this coveted award this year.

“Christie is honored to once again partner the SIFF as the exclusive digital projection partner, and supplying our cinema projectors for screening a number of feature films worldwide distinguished for their artistic excellence,” said Jason Pei, deputy general manager, Christie China. “It is said that a film festival exemplifies the perfect marriage of art and technology, and this is fully demonstrated at the SIFF. We are fully committed in putting the best possible image on screen that allows all distinguished guests and audiences to enjoy a comprehensive and highly satisfying cinema experience.”

Lin Yu, vice president, Christie Asia Pacific added, “Christie’s digital cinema projection technologies have lit the screens of numerous film festivals around the world, and we are well-regarded as a trusted partner. Besides the SIFF, we are proud to be associated with major film festivals like Cannes and Toronto International Film Festival by allowing audiences to relish the unsurpassed digital projection technology that Christie provides, and which brings the creative visions of filmmakers to life on the screen.”

In conjunction with SIFF, Christie is participating in the CinemaS Shanghai International Film Forum and Exhibition, which takes place at the Shanghai Convention & Exhibition Center of International Sourcing from June 22-24.