Bloodshot: The Illusion of Choice 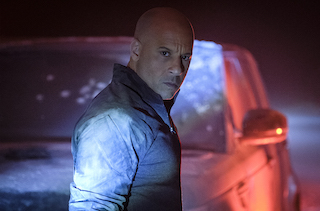 In a cinematic universe expanding with superheroes, the creative challenge for filmmakers is to set newcomers apart from the crowd. The task was doubly important for Bloodshot, the first installment of a new franchise that Sony Pictures plans for characters of comic-book publisher Valiant Entertainment. The studio assigned responsibility to Dave Wilson, an established video game cinematic and trailer director for Blur Studio but first-time feature director, who in turn worked alongside cinematographer Jacques Jouffret, whose credits as a camera operator include Deepwater Horizon and Transformers: The Last Knight, and as a DP include The Purge and Mile 22.

“I was blown away by Dave’s imagining for the world of Bloodshot,” says Jouffret. “This is a science-fiction set, but he wanted to ground the story in reality so that the near future feels just a step away. Most superhero movies rely on CGI or cartoon-like visuals, but Dave wanted to portray a real environment. This really excited me.”

Wilson has described Bloodshot as a film about “the illusion of choice in a technologically advanced society.” Based on the bestselling comic book, Vin Diesel stars as Ray Garrison, a Marine recently killed in action and brought back to life by a sinister corporation. With an army of nanotechnology in his veins, he becomes a superhuman, but in struggling to recall memories of his past life, he uncovers an apparent conspiracy and embarks on revenge. 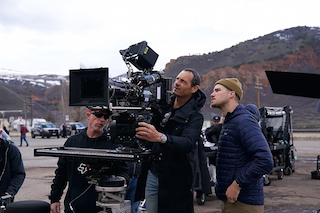 Jouffret and Wilson’s principal stylistic reference was the work of director Tony Scott (Enemy of the State). “The chief elements we took from Tony were the use of multicamera and long-lens shots with foreground action,” Jouffret explains. “We didn’t want to give the audience a clear view of the action, but to keep them off guard, like a live-action documentary. So, if there’s a car accident, we see the start of it or its aftermath but we don’t have a good vantage point to see all of it. This sensibility directly informed our choice of camera and lens package.”

Bloodshot is Jouffret’s fourth film as DP with Panavision’s Millennium DXL2. It’s a camera, he says, that closely approximates the experience of shooting on film thanks to its Primo electronic viewfinder. “As a camera operator, I grew up with my eyes on the eyepiece, seeing instantly what a shot looks like,” he reflects. “My frustration with digital is that this instinctual creative experience with an image is lost because you are referring instead to a DIT and a monitor. The DXL2 is amazing for me because I can finally put my eye on the OLED eyepiece just as if I were shooting film. It means I can make decisions on set. It’s not that DITs don’t have a place —I certainly will check the monitor —but I prefer to be on set, where everything is happening, rather than in the DIT tent. Panavision have succeeded in giving DPs a tool that they can put on a dolly or shoulder and retain creative decision making.

Jouffret also stresses the importance of lens choice. “In the digital world, lenses are basically the only organic element left. The optical aberrations lend a unique element to the project, and that makes them truly valuable. Lens choice is the one aspect of a show that will stay entirely consistent through to post. You know that the lens characteristics that you chose are not going to change.” 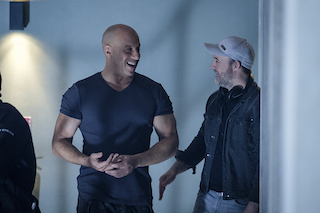 For Bloodshot, Jouffret paired the DXL2 with a set of T Series anamorphic lenses, which are tuned to be compatible with digital sensors without losing any of the imaging characteristics that have become part of Panavision’s anamorphic grammar. “This speaks to our creative decision to inject reality to the story,” he says. “Anamorphic can get you close to the actor without losing their environment. The problem, though, is that anamorphic has a minimum focus that limits most lenses to 3-4 feet. With the T Series 60mm, however, minimum focus is 18 inches. The entire range is beautiful, but my go-to lens on Bloodshot was the 60mm for most all medium close-ups, and a 100mm macro that we used for inserts.”

Production was photographed largely on sound stages in Cape Town and Budapest. With up to 70 setups a day, Jouffret typically rolled with two handheld DXL2s, one DXL2 with a long lens, and a Red camera recording wides from a Technocrane. “I wanted the cameras constantly on the move, never static, always finding the shots and angles so that we continually sense that nothing is perfect or clear,” Jouffret explains. “This is an element that has been missing in most superhero films, which tend to be shot on bluescreen. We didn’t want CGI to overpower our story.”

The filmmakers shot 7K (compressed 5:1) in order to use as much of the sensor as possible. “I believe in large format, and the more pixels I can get the better,” he says. “I love the color science that Light Iron have designed into the camera. The Light Iron Color 2 Film LUT emphasizes the DP intent as opposed to a perfect rendition of color.”

Jouffret also employed smoke and other atmospheric elements on set to achieve a degraded naturalistic look in-camera. “With the look we created on the set, we have ended up with a picture that is very, very close to our original intent,” the cinematographer observes. “We are introducing a character with extraordinary power, but telling his story in a way that is only just beyond imagination.”