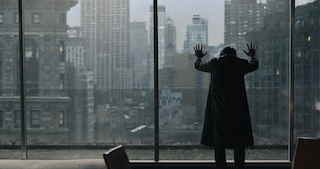 Ben Davis, BSC has become an old hand in the Marvel universe. Doctor Strange marks his third Marvel film as director of photography. He also shot the global hits Avengers: Age of Ultron and Guardians of the Galaxy. “Marvel very much is a universe with its own language, but the three films I've done have been vastly different.”

In Doctor Strange, a car accident changes the fate of brilliant neurologist Dr. Stephen Strange, played by Benedict Cumberbatch, who in his quest to heal and rebuild his life is trained in the mystical arts by the Ancient One to keep inter-dimensional peace.

Davis met with Strange director Scott Derrickson on the set of Ultron. “It's hard to say why these things happen or why I was selected to do Doctor Strange, but Scott and I got on very well and it all started like that.”

Marvel gravitates toward the digital format for its movies, and production on Doctor Strange hit just as the Arri Alexa 65 camera was being introduced, and Panavision's large-format lenses were experiencing a resurgence.

Davis, a self-professed “Panavision guy,” selected the company to service the production. “I've had an association with Panavision since I was a teenager working as a camera technician at Samuelson, which was a Panavision agent in the U.K. They have stood by me and supported me throughout my career.” 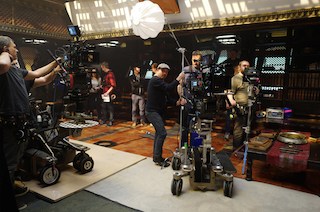 Lenses were another reason he ended up at Panavision. “We did a lot of lens testing, and the cameras had just come out,” he adds. “We had four lens sets that covered the format, but since then, the lens range that Panavision has available now is greater than when we were in production.”

Out of Panavision London, Davis selected two Panavised Arri Alexa 65 cameras, along with two Arri Alexa XTs for backup and special shooting situations. “One XT would occasionally get thrown in when we shot with a third camera,” he says, “or if we were on an action sequence, we had a fourth camera.”

Davis opted for Panavision System 65 lenses as his main set, a set of Panavision Primo 70s, and two re-housed Hasselblads. A mount adapter also allowed him to use the System 65 and Primo 70 lenses on the Arri XT cameras. For Davis, digital images can be a bit too clean, preferring to use atmosphere, flare and older lenses to “corrupt” the imagery in some way.

“What I was interested in was close-up work with faces. When we tested the System 65 lenses, I immediately became aware of how great the resolution was and how great the exposure latitude was from black to white,” says Davis. “The Panavision System 65 lenses were a consistent T2.8, whereas some of the re-housed Hasselblads tended to be stops of 4-plus. Because we had a lot of night and night interior work, I just felt that going into it with only a set of T4 lenses wasn't a good idea. I'd have to have more light.”

With all the digital work happening in New York, Hong Kong, Los Angeles, Longcross and Pinewood, shooting in Nepal called for a different approach. “What Kathmandu has is this great texture, and we were really keen on capturing the dust, the heat, the smoke, the grime, the reality,” Davis recounts. “I thought we should shoot film because it would deliver that, particularly daylight exterior in harsh sunlight with lots of smoke and texture. Also, Kathmandu was going to be one of those shooting scenarios where we had to be discreet with run-and-gun stuff on the streets in real crowds. I felt the Panavision Millennium XLs would whack it on the head – put a battery on back, switch it on and go.”

Through the complexity of global travel and a newer, larger digital format, Davis says the production went really smoothly. “Panavision was there for me throughout the whole process, and if I ever had a problem, I knew I could contact [Panavision marketing director] Hugh Whittaker or [technical marketing] Lee Mackey on the phone and it would be sorted out immediately.”