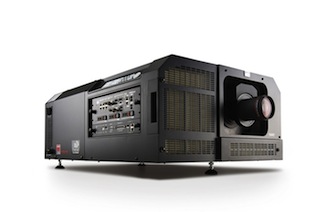 Barco has introduced what the company is calling “a groundbreaking update” for its digital cinema projector families. Named Barco Alchemy, this new generation combines media server functionalities with cinema processing electronics to further increase reliability and ease-of-use in the projection booth. The Barco Alchemy technology is fully compatible with all new and installed Series 2 Barco projectors. The company says that the 4K Barco Alchemy projectors are the first to show 4K movies at 60 frames per second and 4K 3D content on a single projector.

“We’ve delivered on the promise of modular and future-proof solutions with many benefits for our customers over the years. The introduction of the Barco Alchemy technology continues to deliver on this promise,” said Todd Hoddick, vice president digital cinema at Barco. “As the global projection market share leader in the digital cinema industry, we have a responsibility to continue innovating for our current installation base and we are excited to be launching more groundbreaking projection technology that enables 4K 3D and 4K at 60 fps. While many told us this was not even possible, we are launching the technology not just for new Xenon and laser projectors, but this technology is fully available as an upgrade to all existing Barco Series 2 projectors.”

Offering superior image processing, the Barco Alchemy projectors combine the functionalities of an integrated cinema processor (ICP) and a media server into a single projector module. The required hardware is reduced to bring more simplicity and reliability into the projection booth. To minimize the risk of mishaps, the Barco Alchemy projectors have been designed to detect potential operational errors and alert users if, for instance, a scheduled show is missing assets or KDMs. What’s more, the on-board media server allows for integrated storage and fast content ingest.

The Barco Alchemy projectors have been designed to greatly increase the level of operational efficiency. Projectionists can now enjoy an intuitive user interface that seamlessly blends projector control with a full-fledged screen management system. Named Barco Web Commander, this user interface is readily available on the projector without any additional software installation. It is accessed via a web browser and is also fully supported on iOS and Android tablets thanks to the free Barco CineMate iOS and Android app. To facilitate installation and maintenance, the Barco Communicator application has been extended to make the configuration and update of all modules in a Barco Alchemy projector a breeze.

“We have enabled all current and future Barco 4K projectors with brand-new paint brushes and canvases for storytellers to use. I just can’t wait to see what they will come up with to enchant audiences,” said Theodore Marescaux, product manager at Barco.