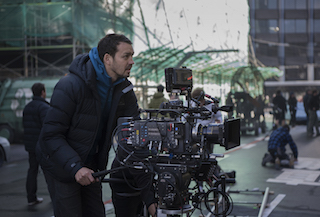 Typically, torn frames appear when a flash or strobe is not properly timed with a camera’s shutter and frame rate. They appear as a flash in the bottom half of one frame followed by a flash in the top half of the next frame. An innovative light source helped Ghost in the Shell cinematographer Jess Hall, BSC avoid the problem and bring a new level of visual sophistication to director Rupert Sanders’ epic feature.

“While I had an arsenal of lights from five LED lighting manufacturers, the synced Creamsource Doppio+ was the only instrument that could guarantee me the exact look I was after for the stun baton scene to get as much interactive light as possible without fear of torn frames,” said Hall. “Sync’d at 24 and 48 frames per second, the Doppio+ covered almost the entire camera frame with one exposure, with three instruments sync’d from one angle and three from another angle.”

For the interactive gunfight sequences in Ghost in the Shell, the Alexa 65 was used at 24 and 48 frames per second, with the higher frame rate normally meaning a higher chance of torn frames. However, using the Outsight Creamsource Doppio+ LEDs with Flashbandit camera synchronizing feature, any chance of a torn frame was totally eliminated.

The Outsight Flashbandit allows synchronization of the Creamsource Doppio+ built-in flicker effects with the camera’s frame rate and shutter through a video signal from the camera. Flashbandits can be daisy-chained so that flash effects can be controlled across multiple fixtures. Outsight has incorporated various lighting effects and shutter sync into its lighting fixtures since 2010. 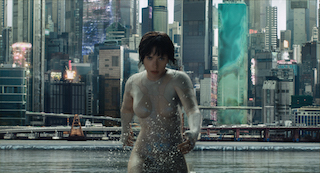 “The interactive light in the film’s gunfight sequences feature the Creamsource Doppios in a very specific way and successfully simulated the muzzle flash of the weapons,” said Hall. "However, for one scene — the Major's capture in Kuze's lair — I wanted to use the Doppios as the only light source. I was seeking to create a very unique and dramatic effect with the scenes only illumination seeming to originate from one source, the stun batons used in the fight. This presented some significant technical challenges. I overcame these by using the Doppios combined with the Outsight Flashbandit to sync the lights precisely to the Alexa 65’s frame rate therefore avoiding torn frames. Using these instruments, I could also be incredibly precise with both the intensity and the duration of the flashes.”

While aware of Outsight LED lighting instruments for a long time, Hall only started testing them for Ghost in the Shell in New Zealand with gaffer David Brown and Outsight managing director Tama Berkeljon.

Hall created a 28-color pallet derived from Masamune Shirow’s anime Ghost in the Shell franchise, and Hall’s own photo studies. To help mimic the hazy look of humid Hong Kong at night, he put individual colors in a number of Outsight’s Creamsource Sky units.

“The Sky’s kelvin range is quite great, as is its broad spread, so I used them as an ambient top light built into soft boxes, along with other units,” explained Hall. “With total control of color and intensity from a lighting desk I had maximum flexibility. I was able to call up any one of my unique pre designed 28 colors instantly. Using this system I could create Hong Kong 2029 exactly as we had envisioned and designed it. Furthermore using the metadata output from the lighting console all this information could be shared with visual effects to ensure a unified and seamless vision.”

“Working with Jess and Dave, it was really great to see how Jess applied the technology we incorporate into our lights to enhance his creative vision, and support Dave so he could enact what was needed by Jess on set,” said Berkeljon. It’s rare that a manufacturer gets to share in the vision of the filmmakers to this extent.”

“One of the great things about working on Ghost in the Shell was the close collaboration with Tama and other manufacturers and designers, including the development work of the Alexa 65 and our customized Panavision lenses” said Hall. “This all helped to push the boundaries of the technology and provided me with incredibly precise control of the image, including its unique color palette.”